The Azerbaijani capital Baku is beautifully situated on the south coast of the Absheron Peninsula, which is surrounded on both sides by the Caspian Sea. The sea is actually a large lake that, however, seems like a sea off the coast of Baku and from the main roads along the coast.

The Baku Boulevard promenade stretches along the lakeshore, and there is always activity and wonderful outdoor life under the trees and the atmospheric lights from the lampposts. The boulevard connects not only the city and the water, but also many of the city's sights with the old inner city as one of the gems.

One can easily imagine the historical life of the inner city's low and dense buildings. Old hostels for the Silk Road caravans are here, as well as beautiful bathhouses, mosques, palaces and market streets; and it can all be seen from the top of the Maiden Tower, which stands as one of old Baku's landmarks.

Baku is also oil. Everywhere in the area there are drilling towers on land, and also in the Caspian Sea, the black gold is here in quantities that over time have created enormous wealth to people and the state. It is seen in many of the town's mansions from the time of the oil barons, and the amazing Flame Towers in modern design are visible and impressive signs of the country's oil wealth.

There are rock carvings, drill towers, mud volcanoes and lovely beaches around Baku; all within close distance to the capital. The oil is everywhere, and that in itself is an experience to see when i.e. burning mountains have had non stop fires for years. 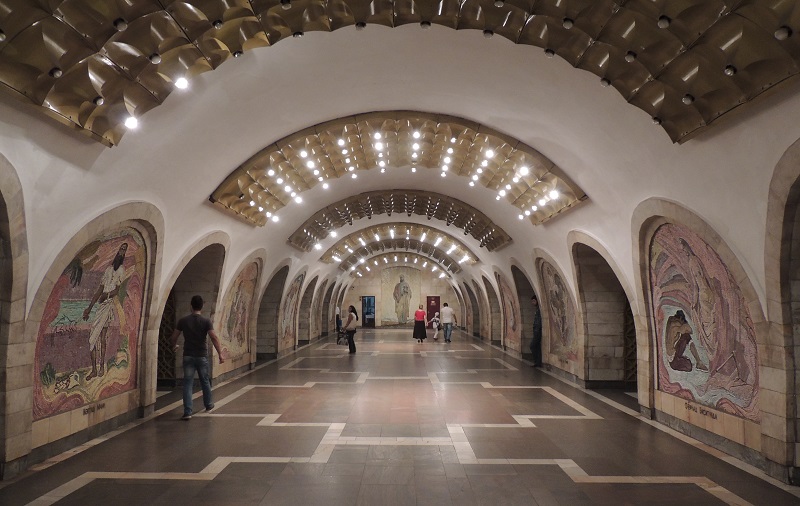 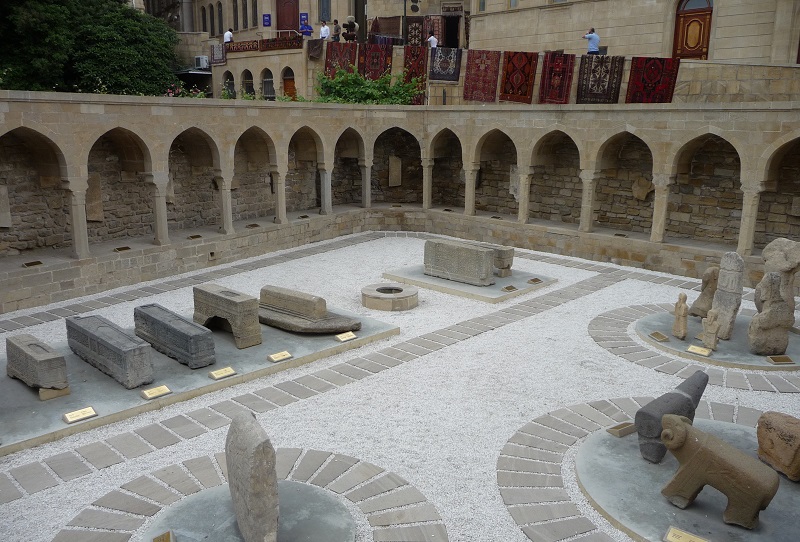 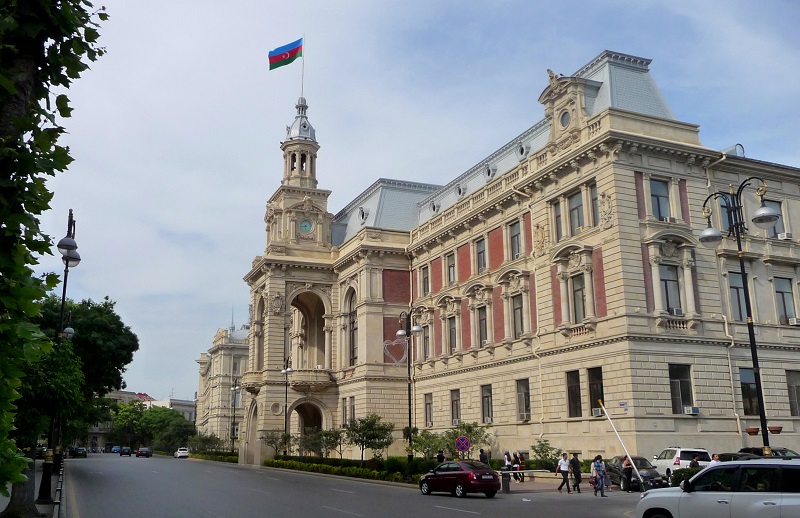 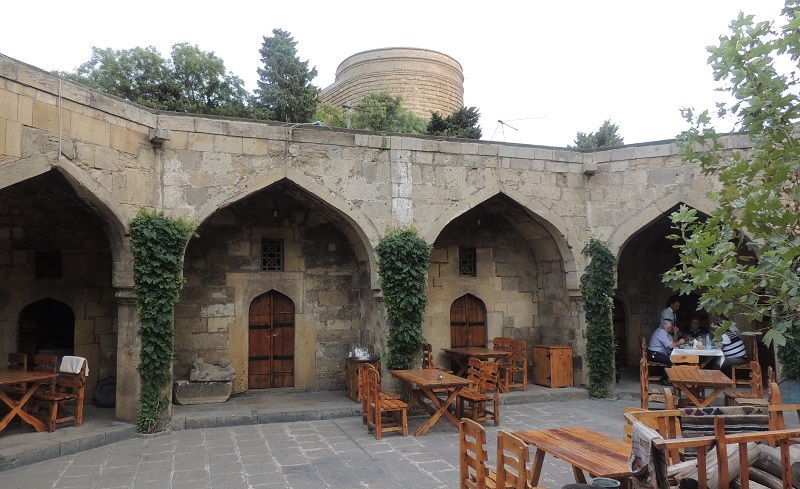 Founding of Bagavan
There have been settlements around Baku and the Absheron Peninsula since the Stone Age. In Baku itself, archaelogical finds have been dug out from the Bronze Age, which may indicate residents here already at that time.

In the century after Jesus' birth, the Roman Empire came to this region in two periods. They have left Roman inscriptions and the village of Ramana from about the year 90 in the Sabunchu district. According to the disciple Bartholomew, the city of Albana was located here. At that time it was possibly known as Albanapolis.

According to the legend, Bartholomew converted the king of Armenia to Christianity, which resulted in the martyrdom of the disciple when the king's brother realised this act. Bartolomeus was executed and it may have taken place at the present Virgo tower in the old town of Baku.

Sources mention Baku and the fire that rose from the earth here from nature. The earliest description is from the hand of the Greek historian Pricus, but his and other depictions of the following centuries do not mention much of the city's development until the 9th century.

The origins of Baku's name are not certain, but the name may have come from the Persian Bagavan meaning the City of God. Baku was also called Bagavan in the first centuries.

Medieval Baku
From around the year 1000, more details from Baku's history are known. During that time, the city alternately belonged to Turkish and Arab Khanates, such as the Khazaria, and during that period the city was also attacked by the expanding people of present-day Russia. It came to several fights; among others, in 1170, when Shirvanshah Akhsitan I's troops and navy fought back a Russian attack.

Over time, the Shirvan area had been established with the Shirvanshahs as leaders. From 1191 the court was relocated to Baku, which thereby became the capital. The court included several institutions such as the country's mint.

Throughout the 1100-1300s, a number of fortifications were constructed in and around Baku. Among them was the Maiden Tower in the central city and the castle of Sabayel on an island in the Bay of Baku.

One of the city's major challenges during the period was rising water volumes in the Caspian Sea. In addition to flooding in the city, Sabayel sank below the 13th-century waterline.

International Baku
Centuries in the Azerbaijani region meant new rulers and new times. For example, during the third Mongolian invasion in the years 1231-1239, Hulagu Khan occupied the city, which in the 1300s experienced a time of flourishing under Muhammad Oljeitu.

City taxes were eased and cultural life was evolving. It was also in this period that local poet Nasir Bakui wrote a poem for Oljeitu. It was the first in Azerbaijani language.

Baku also enjoyed great growth in the trade. Leading European merchant states such as Genoa and Venice were present here, and Baku also traded with the Golden Horde, the princes of Moscow and several other European countries and peoples.

Baku Oil
Stories about large quantities of oil arose from travelers to Baku. Between 1568 and 1574, for example, there were six English missions in the city, from which Thomas Bannister and Jeffrey Duckett described the phenomenon of both petroleum and the oil, which was locally called feather.

The area's first real oil source was established by the standards of the time in 1594; it was in Balakhany near Baku, and in 1636 German Adam Olearius could describe Baku's 30 oil wells.

New rulers
In 1501, the Persian Safavid dynasty was established, and the same year its troops besieged Baku. In 1538, Shah Tahmasp I overcame the reigning Shirvans of the city, and the Azerbaijani Safavid era lasted until 1722, when the power of the dynasty was destroyed.

The following year, Peter the Great's Russian soldiers came to the area, and on June 26, 1723, they won the battle for Baku. Prince Bariatianski became commander of the city defended by two regimental soldiers. Among the commands of the St. Petersburg czar was to send oil from Baku to the capital of the empire.

Russia's troops were forced to leave Baku in 1735 following an agreement with Shirvan leader Nadir Shah, and after a few years a partially autonomous khanate was established in Baku in 1747. From that same year, the Khanate was part of the larger Quba khanate, which, like the Khanate of Baku, had arisen after the dissolution of the Safavid kingdom in 1747.

At this time, 5,000 people were living in Baku, whose economy was in dire straits despite the large amounts of oil that was eventually produced. Almost constant strife and looting had left its mark.

The Quba khanate was heavily dependent on Russian military aid, but over time Russia itself had ambitions for power in the Caucasus. In 1796, 6,000 soldiers under the command of General Zubov started the conquest of Baku, and after the fleet's entry into the Bay of Baku, the forces were able to quickly occupy the city. In 1797, however, they left the area again for a time.

The Russian Empire
In the years 1804-1813, a war between Russia and Persia arose over the lands of the Caucasus region. The war ended with the Treaty of Gulistan, which assigned the Russian czar most of the land. Baku had already been conquered in 1806, and the city formally transferred to Russia after the end of the war.

The 19th century under Russian rule was a time when Baku's great growth and flourishing started. New suburbs was laid out, and medieval defenses along the Caspian Sea were replaced by new port facilities. The population increased continuously, and institutions such as the city's stock exchange were founded.

Oil boom
Baku did industrially well through the 19th century. In 1823, the world's first paraffin factory saw the light of day in Baku. In 1846, the first drilled oil source in the world was put into operation, and in 1863 a petroleum plant was established.

Over the decades, the abundant oil was pumped up in still larger quantities, and it was a time when oil barons produced huge amounts of oil with the resultant growth in the economy.

The barons, among others, Musa Nagyev, Murtuza Mukhtarov and Shamsi Asadullaev, became wealthy and the oil also provided the basis for the construction of the many oil baron palaces that can still be seen along the Caspian Sea.

The population followed the activity and money in the oil industry. Thus, during the oil boom from the 19th century to the beginning of the 20th century, the city grew faster than metropolises such as London and New York.

The strong growth also led to several projects with the Baku infrastructure. In 1868, a telegraph line was opened to Tbilisi in Georgia, and 11 years later an underwater connection with Krasnovodsk opened; today's Turkmenbashi.

Czar Alexander III came to Baku in 1883 and the trip had been by train from Tbilisi. Baku had by that time been connected to the major Russian railway network.

Oil production grew steadily, and around 1900, 95% of Russia's oil consumption was covered by Baku's production, and during the years of World War I, around 15% of the world's oil was produced around the Azerbaijani city.

The First Independence
In the wake of the fall of the Russian czar, the Azerbaijan Democratic Republic was declared a secular and democratic state. It happened on May 28, 1918 in Tbilisi, and in the beginning Ganja was the capital instead of Baku, who was under the control of the communist Bolsheviks. In time, Baku became the capital, and in the young republic there were initiatives and results such as the founding of the Baku State University.

Soviet Baku
In February 1920, the Azerbaijani Communist Party held a congress in Baku, and they adopted a preparation for an armed revolt. On April 27, the Red Army troops entered Azerbaijan, and the next day they took Baku and began the country's time as a Soviet Republic.

Oil production also increased, and in 1940, 22.2 million tonnes of oil were produced in Baku, representing 72% of Soviet production.

During World War II, Germany attacked the Soviet Union, and one of its objectives was to capture Baku's oil. The plan of Operation Edelweiß was approved by Adolf Hitler on July 23, 1942, and although the German troops did not reach Baku, large defense works were constructed around the city.

Baku grew to a million, and thereby, in accordance with Soviet law, acquired a subway system. New neighborhoods and buildings were built in line with the population influx to the city. In the oil exploration, land based production was supplemented by offshore platforms in the Caspian Sea. The first platform, which was the first in the world, was built in 1947.

Baku Today
With the dissolution of the Soviet Union in 1991, Azerbaijan again became an independent nation and Baku continued as the country's capital.

In recent decades, a lot of new construction has been built in the city, where the Flame Towers stand above the city as a symbol of modern Baku, the capital's ability and the commitment to increased tourism.

In the city, many buildings have also been demolished since the Soviet era, and instead new, promenades, parks and squares have been built.
Skjul indhold her 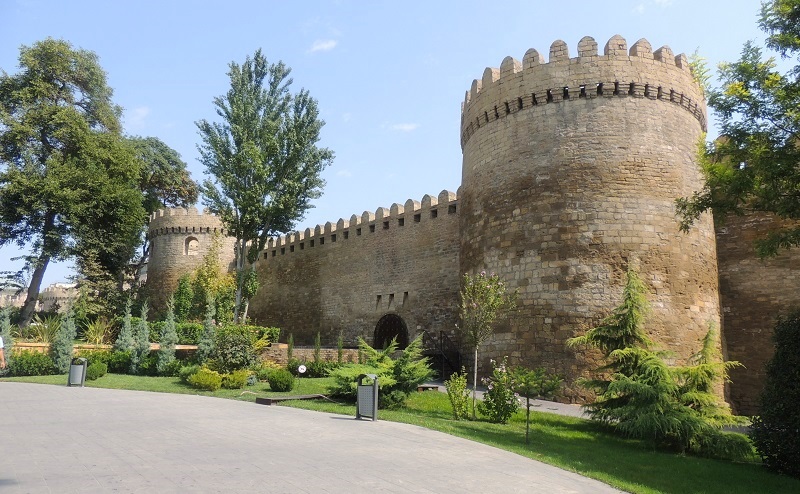 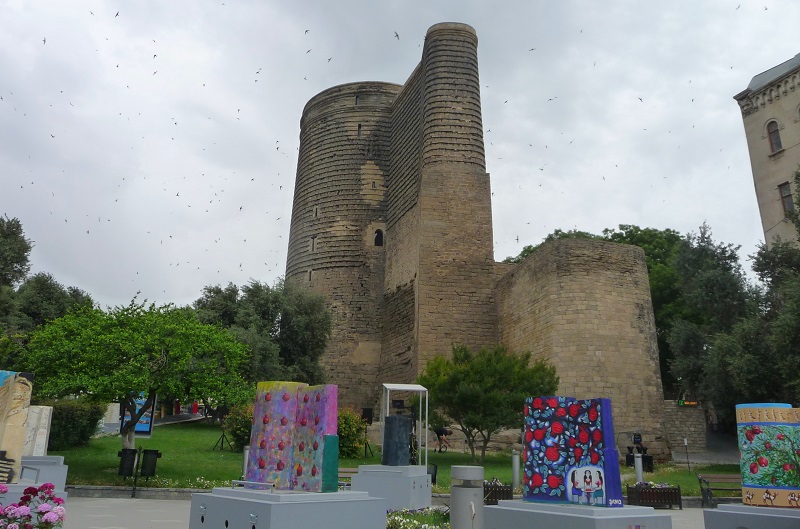 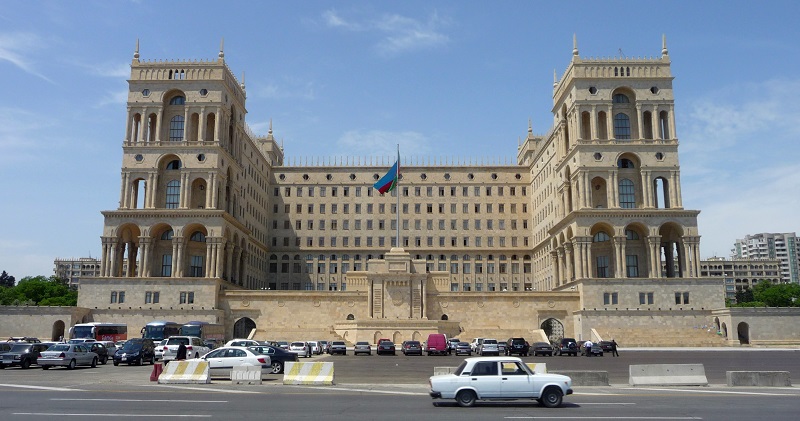 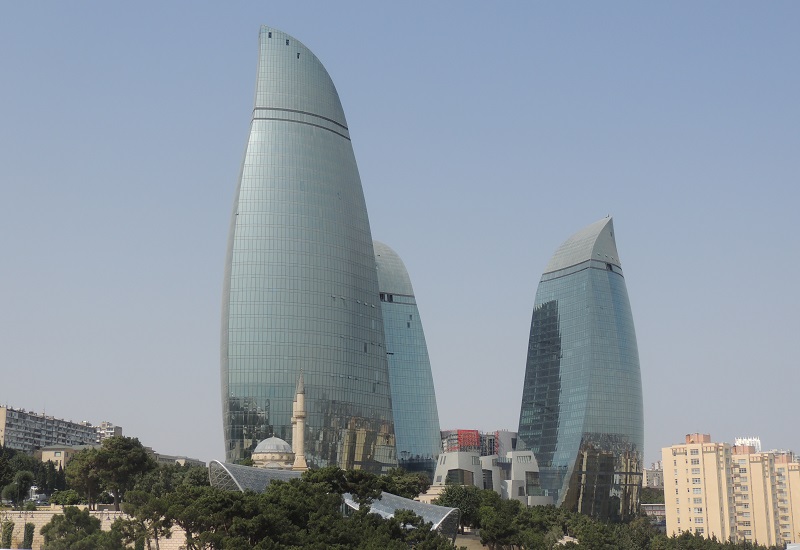 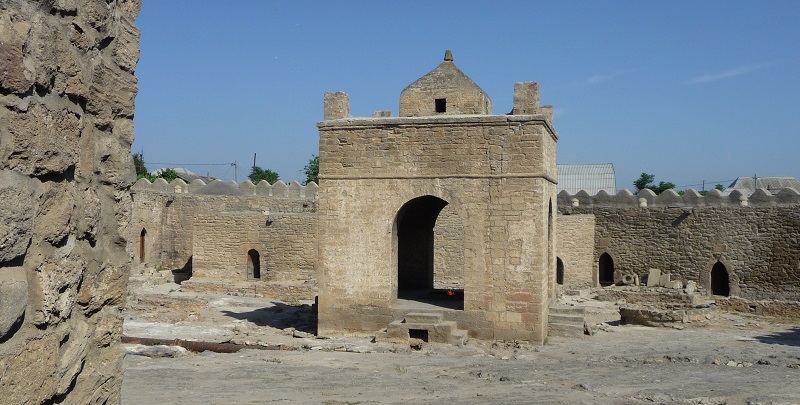 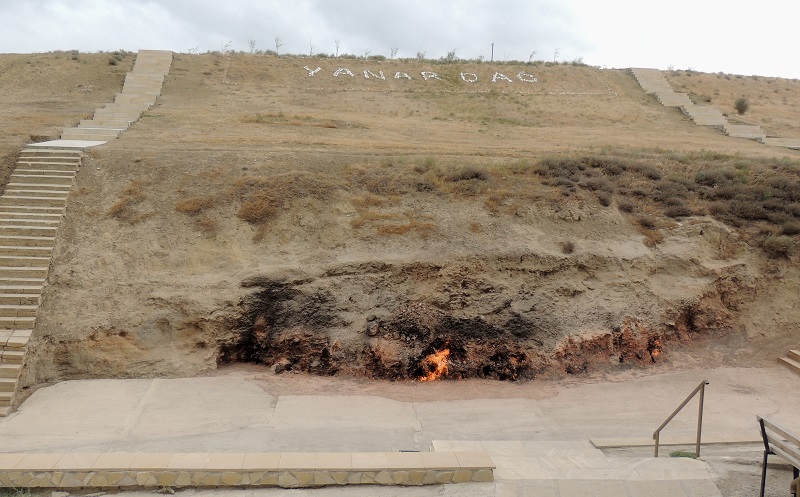 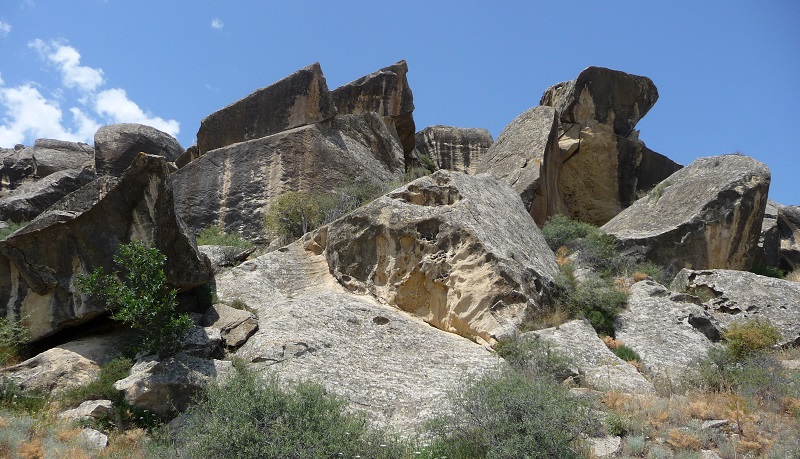