Barcelona is the Catalan capital with millions of inhabitants and a magnificent location on the warm Mediterranean coast. Today, Barcelona is in Spain, but the Catalan history, language and culture clearly make the city and region different to the rest of Spain, and this is interesting to see as a visitor.

Over time, amazing buildings have been built in the various neighborhoods, of which Barri Gotic is the old medieval center with cozy streets, distinguished squares and churches and palaces from ancient times, where rulers of the city were in power. The old town feeling is enjoyed among other places on the beautiful Plaça del Rei and at the cathedral.

Eixample is the district where you will find many of the famous works of modernism, which for many visitors is the main reason for a trip to the city. When you say Barcelona and modernism, you automatically think of the world famous architect Antonio Gaudí. Barcelona was his city and his designs are seen in many places in the city. His masterpieces include La Sagrada Familia, Casa Mila and Park Güell.

Barcelona also opens up to the water, and here is the port worth seeing as well as a walk to the neighborhood of Barceloneta. The many tour boats offer interesting harbor cruises, and in Barceloneta you can both eat delicious seafood and take a dip in the Mediterranean almost in the middle of the Catalan capital. 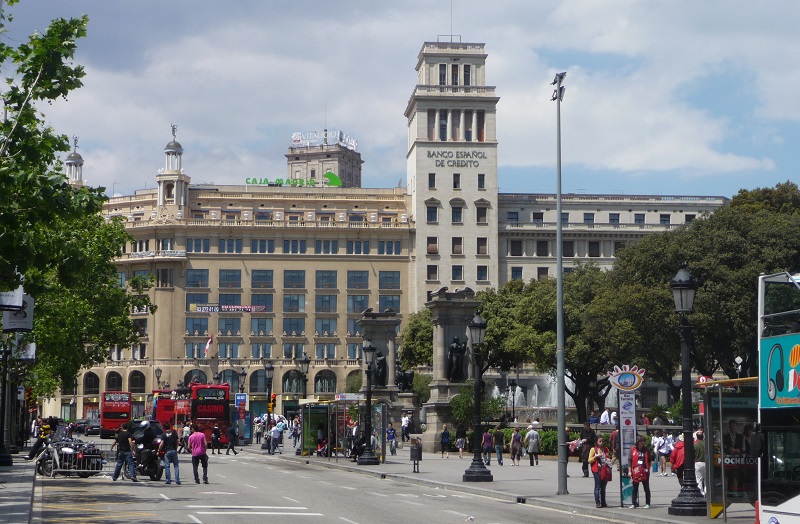 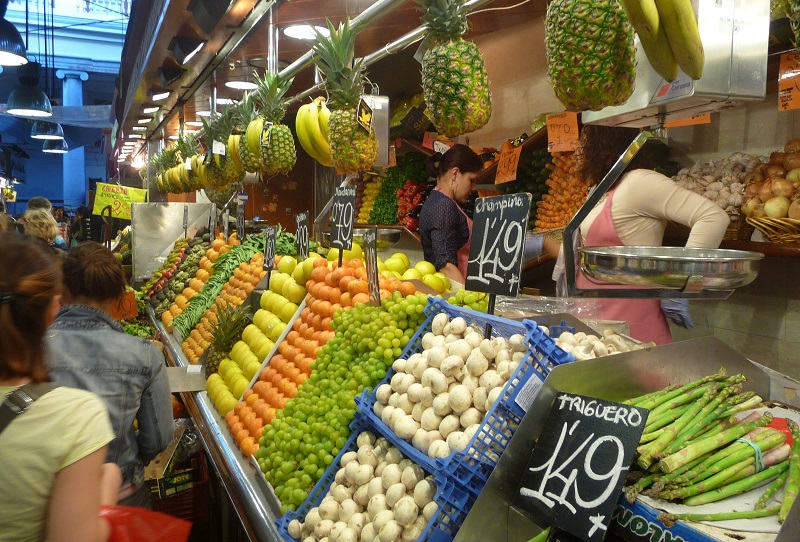 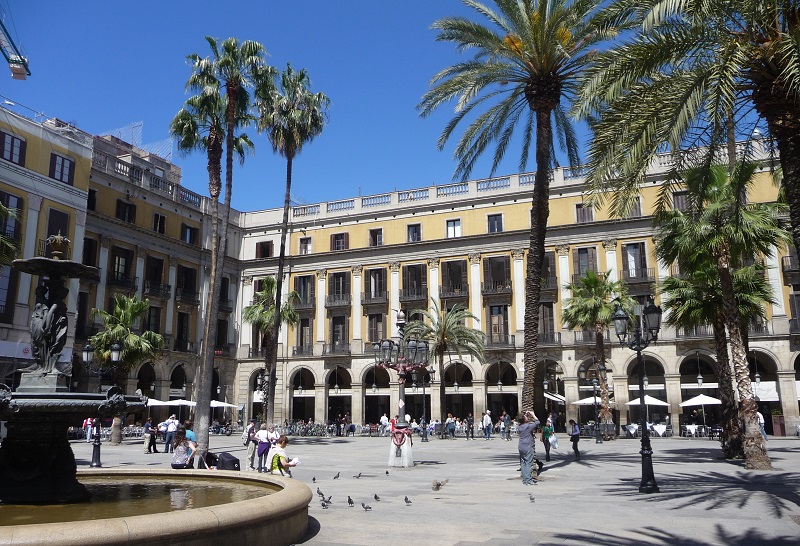 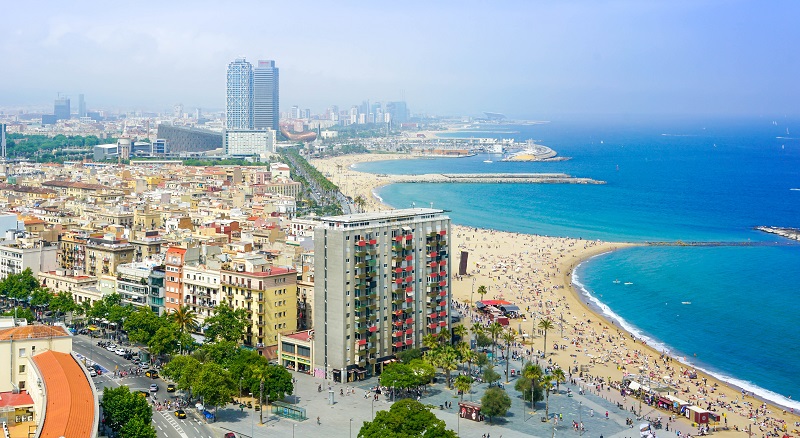 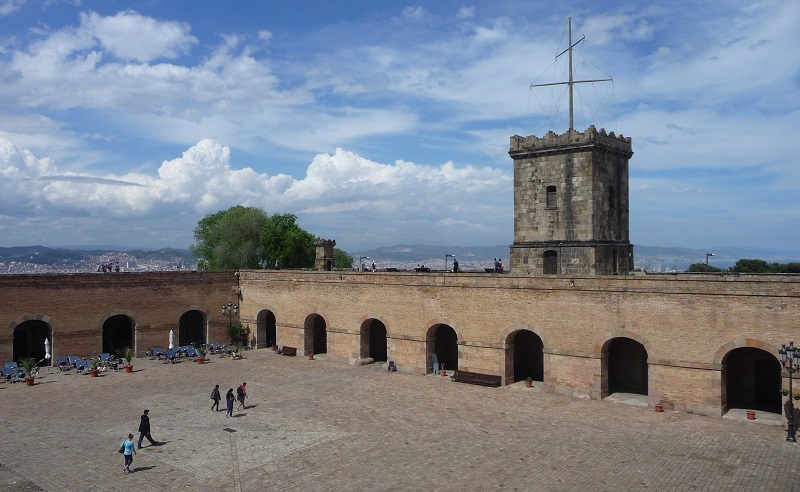 Beginning of the City
The first sure signs of habitation are the Thracian-Iberian tribes who settled the present Barcelona area through the 200-100 BC. They established two settlements near the center of the day; Barkeno in what is now the Old Town, and Laie on Montjuïc. In a non-permanent position was also Kallipolis, a Greek village.

Year 218 BC is often considered the real foundation of Barcelona. This year, troops from the Carthage conquered the area during the Second Punic War. It happened under the leadership of Hamilcar Barca. Despite the particularity, however, Barcelona's name is not meant to come from Barca, but from the Iberian Barkeno.

Roman Barcino
The following period is little known about Barcelona's history, but the next time the area became historically interesting was under the increasing influence and conquest of new lands by the Roman Republic.

The power of the Iberian Peninsula was a showdown between Rome and Carthage, and this battle ended Rome victoriously. With the end of the Cantabrian Wars in the year 19 BC the region and thus the settlements on the coast had come under Rome.

Barcelona was a less significant settlement compared to, for example, Terraco and modern-day Zaragoza, and it gained Roman status of colonia named Barcino.

Barcino's location on the trade route Via Augusta led to rapid economic growth helped by a tax-exempt status. At that time, the city consisted of 12 acres, including two main streets and a central forum.

The population increased rapidly and during the 100's it reached 5,000. They mainly lived on trade in food and wine from the fertile area.

Decline of the Roman Empire
Germanic tribes increasingly came to looting from the mid-200s, and Barcino's defense works were therefore greatly expanded. City walls with 78 towers were established and made the city the most fortified in the province.

Despite the attacks and the initial decline of the Roman Empire, some development also occurred in Barcino. The area's first bishop's seat was formed in Terraco in 259, and Bishop Preactatus was later mentioned as the first bishop of Barcino. It happened when he attended the Synod of Sardica in 347.

Throughout the 400s, more and more Germanic tribes invaded the Iberian Peninsula, and not least the West Goths created unrest in the area of ​​Barcino during the crumbling West Roman Empire's slow dissolution, which in 476 was a definitive reality.

With the fall of Rome, Barcino came under the kingdom of the West Goths, who were led from Tolosa; today's Toulouse. From 507, however, Gesalec moved the capital to Barcino; a status it had to 573, where the West Goths instead established government headquarters in Toledo.

New rulers
The centuries after the Eastern Roman Empire were marked by various rulers of Barcino, whose name also changed constantly.

The city was, under all leaders, a strong provincial town; not least because of the large defenses built during Roman times.

The 7th century was marked by the Muslim Moors who, from 711, penetrated the Iberian Peninsula and conquered Tarraco in 717. With the fall of Tarraco, Barcino volunteered to avoid destruction during a battle of the city which came under the Moors to was called Barshiluna.

During the Moors' time in the city, Barshiluna's Cathedral was converted into a mosque and taxes were imposed on non-Muslims. Otherwise, the time was marked by military focus on defending the city and the area during the troubled time.

Frankish Barcelona
In 781, Louis became the pious king of Aquitaine, and as the son of Karl the Great and later co-ruler and king of the Franks, he was a powerful man seeking to expand the kingdom to the southwest.

In 801, Louis conquered Barcelona from the Moors after a long siege. The newly-conquered regions became the southernmost part of the reigning Carolingian kingdom and were established as counties, which was also the case for Barcelona.

The importance and power of the counties increased over the years, and as the Carolingians weakened, the local administration grew stronger.

In 878, Wilfred I became the last count in Barcelona, ​​appointed by the king, and Wilfred had also gathered several counties under him and thus had a larger power base. At the death of the Count in 897, his son, Wilfred II, came to power in Barcelona, ​​and he became the last Count here to swear allegiance to the Carolingians. It increased self-government despite Barcelona formally remaining part of the French Empire until the signing of the Corbeil Treaty between Louis XV of France and Jacob I of Aragon in 1258.

The city flourishes
Over the centuries, Barcelona grew due to the city's strong defense and the increasing power of the local counties, which they used to develop an increasingly large part of the area whose land had been depopulated through wars for hundreds of years.

Barcelona became the leading city in Catalonia at that time, and it was many times larger than Girona to the north. In the expansive city, the economy was good, and it was a major source of dominion; both the counts and the kings of Aragon.

Based on, among other ancient Roman laws, the city evolved continuously, and over time Barcelona became an ever-greater competitor to Madrid's dominance in the Spanish territory.

The time of the Castile
In 1469, Barcelona and Madrid "married each other", as the marriage between Ferdinand II of Aragon and Isabella I of Castile united the two great kings and thus lands. It provided peace and new opportunities, but also breeding ground for further competition between the two main cities.

Spain was, at that time, financially driven by trade in the Mediterranean, and that increased Barcelona's strategic importance. That changed dramatically with the Spanish colonization of America, which brought new fortunes to the country and to Madrid. Barcelona's importance was declining, and although trade here continued, the growth of the colonial economy lay.

Madrid, among other things, instructed Barcelona not to trade with the new colonies in America, and in the late 1600s Catalonia declared war on Spain and claimed independence. It happened under the protection of France. The Spanish troops led by the Castile besieged Barcelona and conquered the city.

Spanish strife
At the beginning of the 1700s, the Spanish War of Succession ravaged from 1701 to 1714. The war broke out with the extinction of the Spanish Habsburgs with Karl II as the last king, and the parties of the war were mainly Austria, England and the Netherlands against France. Spain was at the heart of the battle, and here Castille stayed with France and Catalonia with Austria.

Both France and Austria had a candidate for a new Spanish king, but when Austria became emperor in 1711, France left with England and the Netherlands at the Peace in Utrecht two years later. It paved the way for the French bourbon with Philip to rule Spain.

For Barcelona, ​​support for Austria had consequences. The Castile, on its way to the takeover, besieged the city in the years 1713-1714, and when Barcelona and the Habsburgs from Austria lost the settlement, Catalonia was ordered to abolish its regional government. At the same time, the citadel of the city was rebuilt so that it could be used for monitoring Barcelona in the future. The Catalan language was banned at the same time, so autonomy was lost in several ways with the war.

Industrial revolution and new growth
From the end of the 18th century a new flourishing started in Barcelona. Industry and trade became economically more important around the Mediterranean, with the Port of Barcelona a major asset.

With the economy, other things and conditions in the city also grew. A new fort was built on Montjuïc, and here French astronomer Pierre François André Méchain was set to make measurements of various distances leading to the production of the first prototype of a meter defined as a 1: 10,000,000 by the distance from the North Pole to the Equator. The final meter stick was produced in platinum and presented in 1799 in Paris.

In the early 1800s, growth in the city continued. Trade with the American colonies became legal again, and after a few years as part of Napoleon's France of 1812, industrial development in Barcelona as elsewhere in the country really began to take off.

Spain's first railway was built from Barcelona to Matero, and a major wine production and iron industry was developed, among other things. The city's population also increased steadily, and over the years a greater expansion of the city's neighborhoods occurred; eg with Eixample.

Catalan Independence
Thoughts At the beginning of the 20th century, Catalan self-understanding rose again, and Republican thought was an issue of increasing importance to many local groups. Spain's leader Primo de Rivera later banned some political entities, and other Catalan institutions such as the FC Barcelona football club were closed.

After the fall of Rivera in 1930, the Catalan nationalists proclaimed Catalonia as an independent state, but this was withdrawn following strong pressure from Madrid. The former regional government was reinstated, but already closed again in 1934 following political attempts to disassociate Catalonia.

Immediately before the impending Spanish civil war, a regional government was again formed. As Franco's troops in the first period of the Civil War advanced rapidly from southern Spain, Barcelona stood on the side of the republic along with Madrid, which however fell. The Spanish government fled to Barcelona, ​​and then Franco's military was out of town. The first aerial bombings started in 1938, and in January 1939 the city fell. Spain was again united under a government in Madrid, Catalan was once again banned as a language, and all street names in the city were now written in Spanish.

Throughout the years until Franco's death, development within Spain continued, and not least the rising international tourism to many Spanish regions, including the Costa Brava outside Barcelona, ​​triggered an economic recovery.

Barcelona today
After Franco's death in 1975, Catalan politicians in exile returned to Barcelona, ​​and with the accession of King Juan Carlos, autonomy was formed in Catalonia and the regional government was reinstated.

Barcelona joined the rest of Spain in the EC in the 1980s, and it was the starting point for economic and cultural development the city had not previously experienced. An international highlight came in 1992 when the city hosted the Olympic Games. The construction and investment related to the games meant a continuation of the city's growth period with a strong increase in tourism as one of the effects.
Skjul indhold her 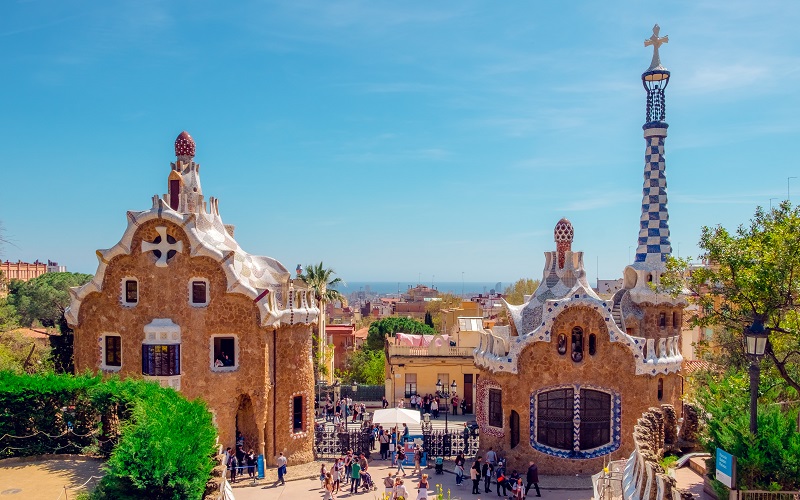 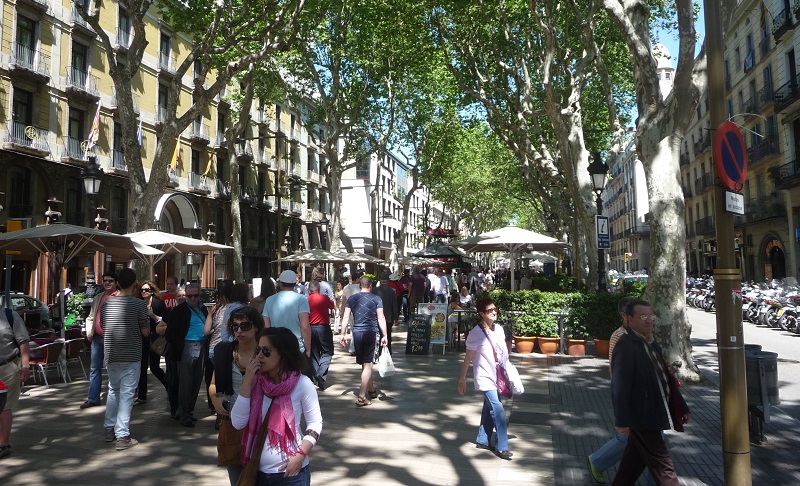 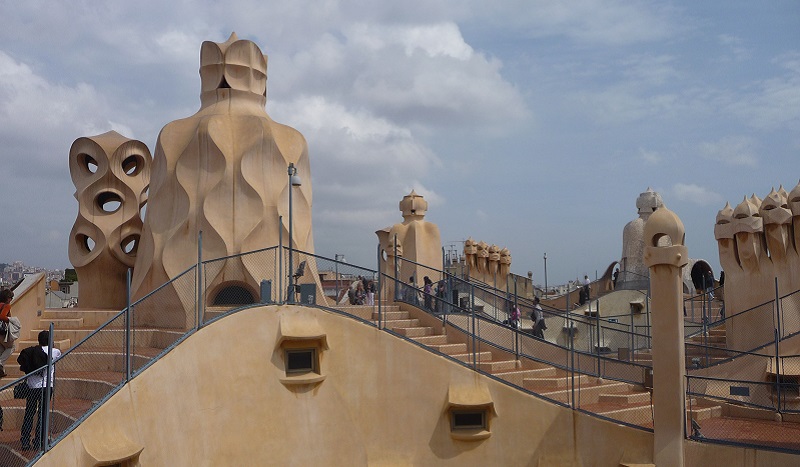 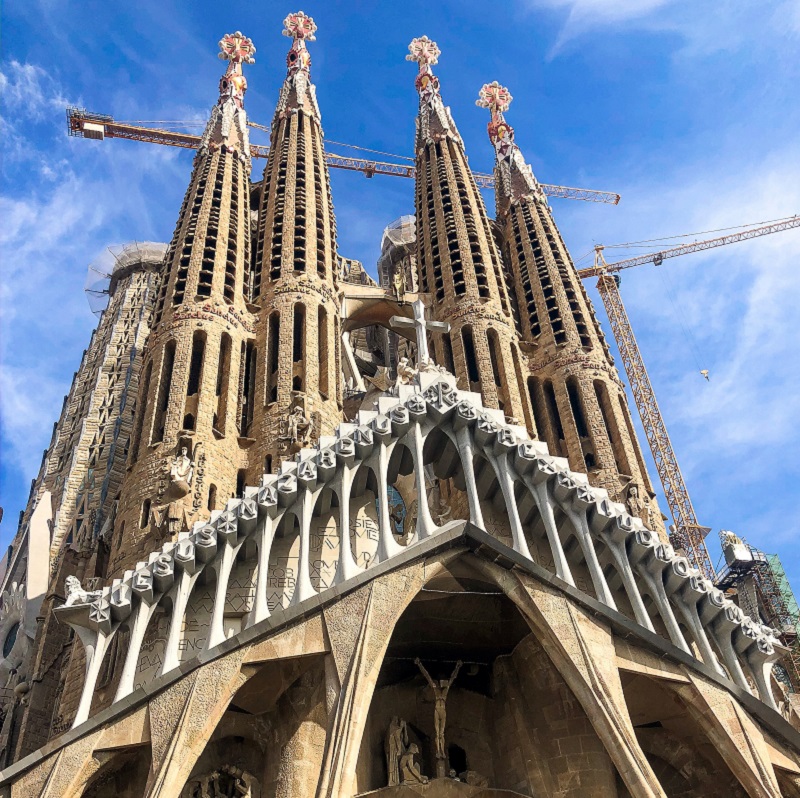 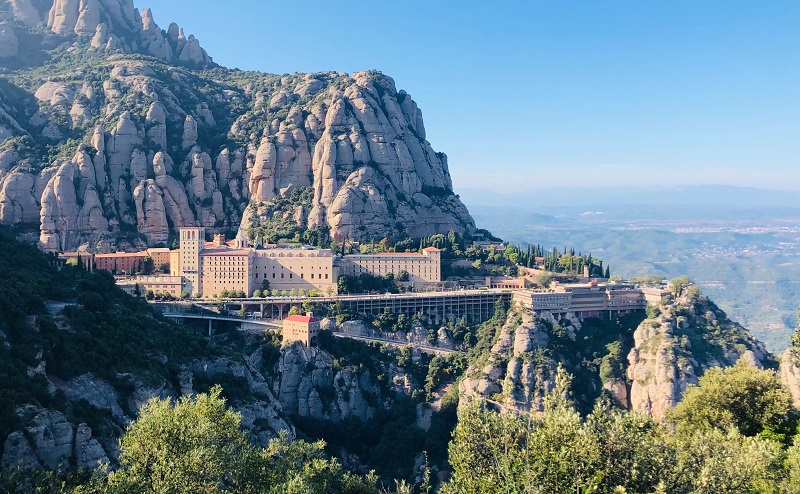