The Sicilian metropolis of Catania is located at the foot of the great volcano Etna. The geography and geology has characterized parts of the history of the city and region, as it has changed  the cityscape. Many buildings in Catania has been constructed in the volcanic black lava from Etna over time.

Geological events have repeatedly left its physical and devastating imprint on Catania, which has had to be rebuilt several times. Today's Catania is thus the result of a tremendous amount of new construction after the earthquake that laid the city and area on gravel on January 11, 1693.

Catania's dominant historical architectural style is the Sicilian Baroque, in which not least the city center's many churches are built. In some places, the churches are almost standing door-to-door, and it is worth to enter and see the magnificent interiors.

Catania's Greek and Roman past can also be seen in and around the city. Odeon, an amphitheater and a theater with up to 20,000 spectators, is situated between the fine buildings of the modern city and provides an interesting contrast to the streets of the 21st century city center.

The downtown area of Catania is manageable, so it's a good city to see on foot; possibly supplemented by a tour bus or a mini train. You can easily walk between all the sights, and if you want to go to the sea or out in the nature, it is also not far. The dominant feature of the area is of course Etna, which is accessible as well. 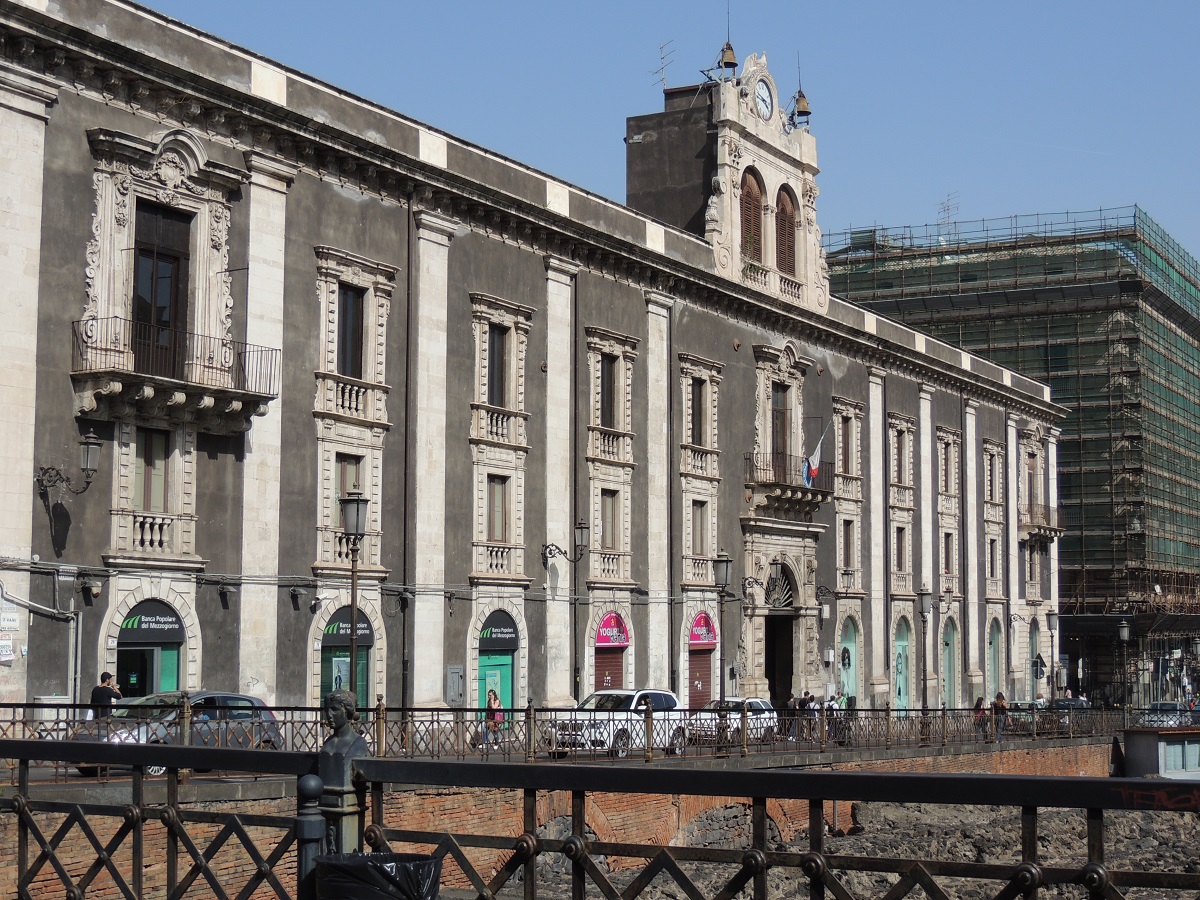 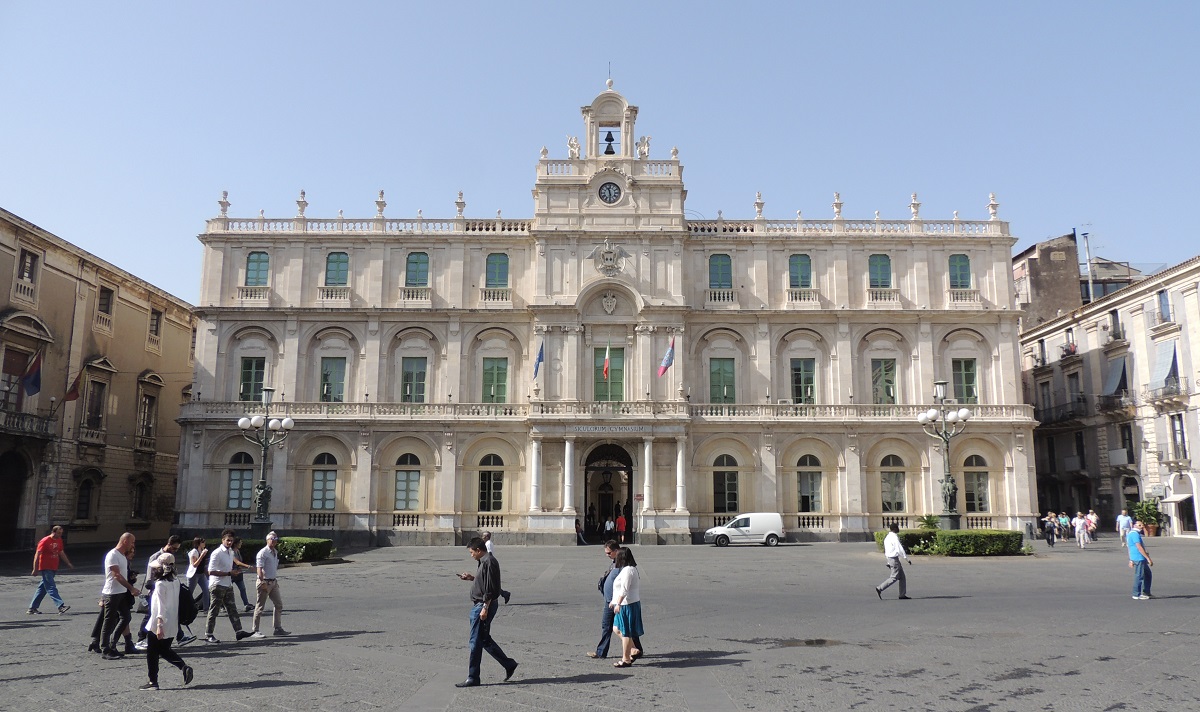 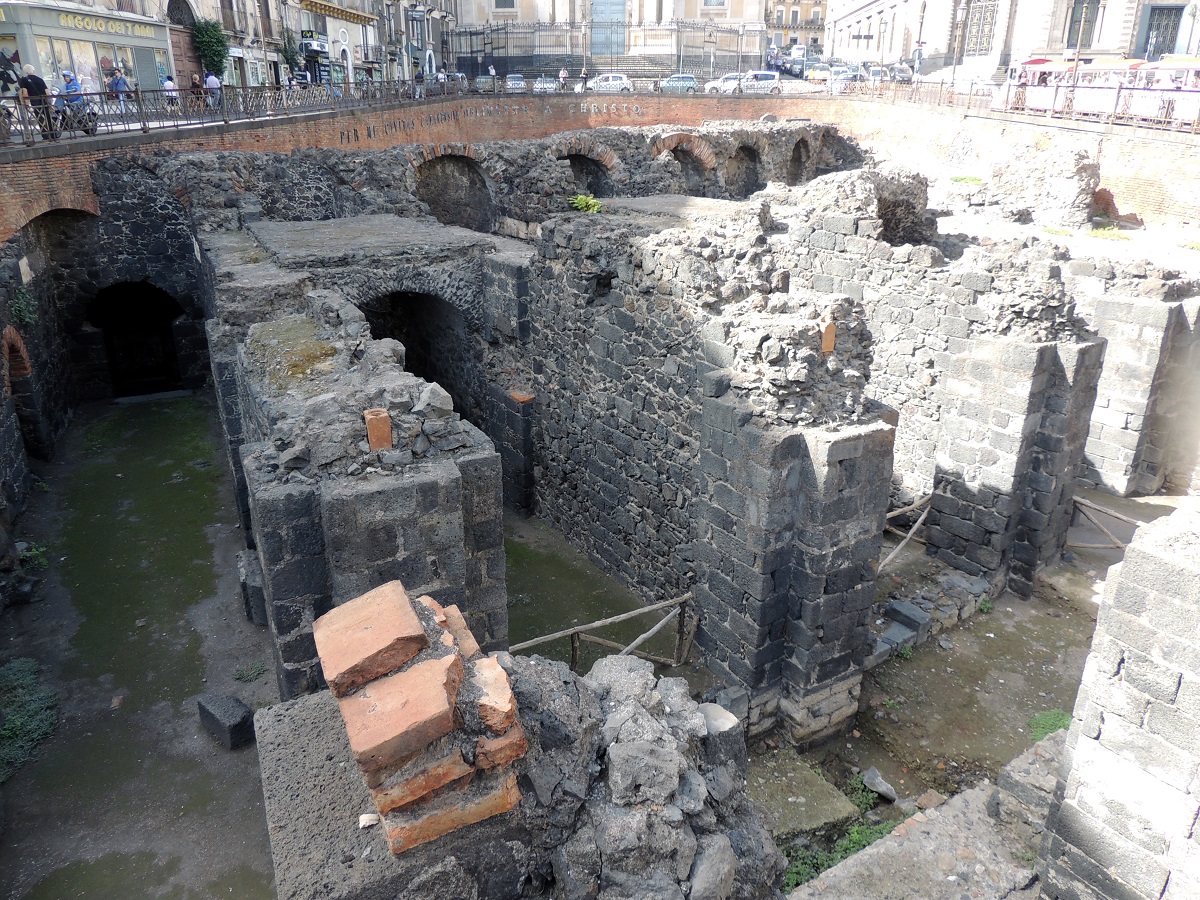 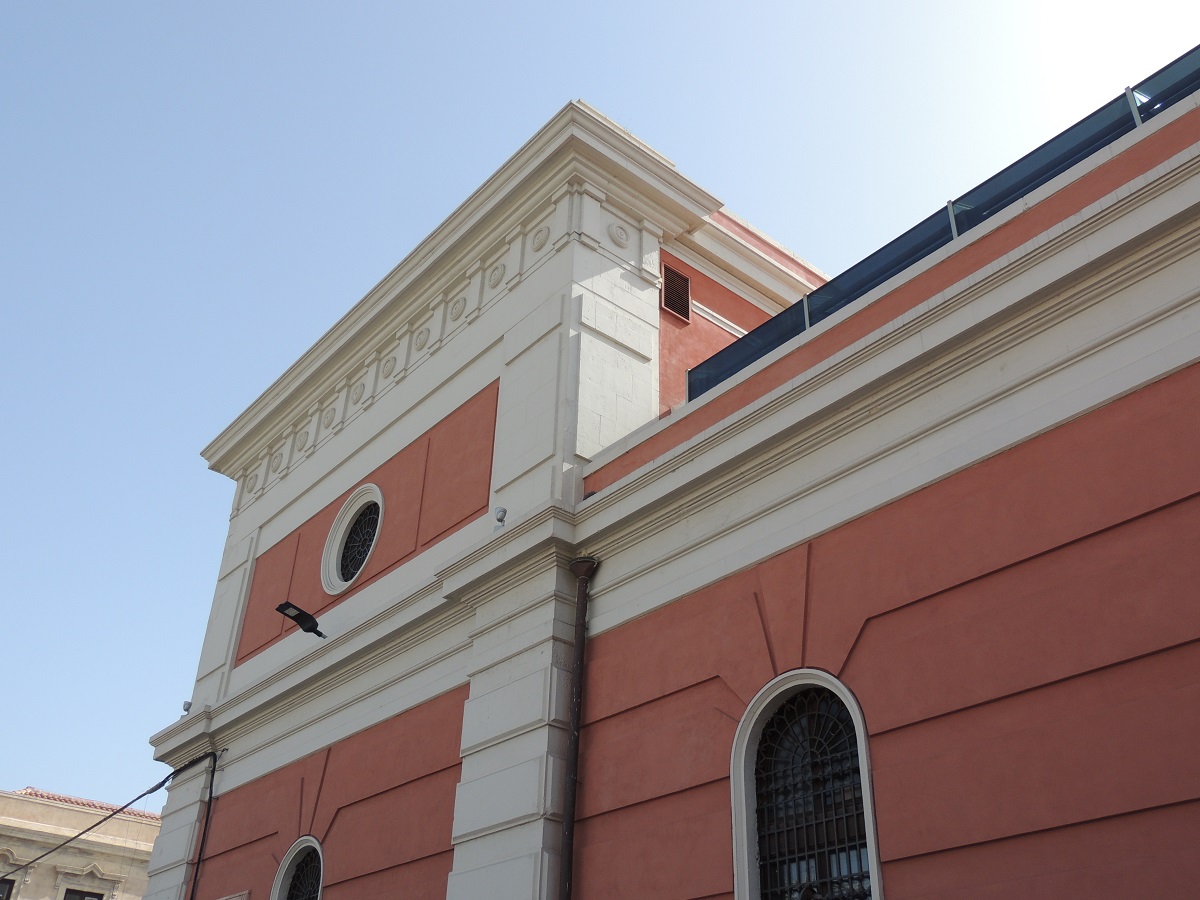 Greek foundations
Catania's history dates back to the Greek colonization of Sicily, and the city started as the settlement Κατάνη / Katánē. At that time Greeks were already present in nearby Naxos, and it was from here that the city was founded. There is no certainty as to when Katán, was established, but it is believed to have happened in the year 730 BC.

According to sources, it is believed that Katán kom quickly came to trade with other Greek cities. It happened not only in Sicily, but also with places in Magna Graecia. Katánē was also an independent city for many years, which stopped in 476 BC when the Hieron ruler of Syracuse expelled all the inhabitants of the city and had them replaced by his own people from the colony of Leontini. It is estimated that more than 10,000 new inhabitants came from Syracuse and Peloponnese. On that occasion, Hieron also changed the name of the city to Αἴτνη / Aítnē, the name of the volcano immediately to the north; modern day Etna.

The Sicilian Expedition
Αἴτνη / Aítnē's time with a new name and new inhabitants was short-lived, forcing citizens to retreat just a few years after Hieron's death. The properties were given back to the original owners, who again lived in their town in 461 BC.

The following decades became a flourishing period for Katánē and for many Sicilian cities in general. That time lasted until 415 BC, when Athens's Sicilian expedition reached the island. It happened in the context of the Peloponnesian War, which spread across the Mediterranean.

Syracuse was the strongest city in Sicily, and it also became the one the Athenians fought against, while Katánē was used as a port for part of the Athens fleet. Katánē was forced into some form of alliance with Athens, and this caused a natural setback when Syracuse won the settlement with the Athenians.

In 403 BC Katánē was subordinate to Syracuse, from which Dionysus I sold the town's citizens as slaves and left it for looting. This time lasted until 396 BC, when Carthaginian troops approached Syracuse. It came to a great sea battle off Katánē, which subsequently fell into the hands of Carthage.

Katánē again won his freedom, and through the following period the city, through diplomacy and changing alliances, maintained itself free of the struggles of the time. Incidentally, the city was the first in Sicily to receive the Greek army commander Pyrrhos, who came to fight against Rome's growing kingdom.

The Roman Empire and the Punic Wars
In 264 BC the First Punic War broke out between Carthage and the Roman Republic. Rome had grown strongly on mainland Italy, but Carthage's rule extended over large parts of Sicily, Sardinia, Corsica, the Balearic Islands, southern Spain and the North African coast.

Catania was from the beginning an active part of the Roman Republic. It was a time of great growth, and it happened despite the fact that, unlike today's Taormina and Messina, the city was not granted federal city status; feederata civitas. During Rome, Catania was, among other things, an important export port city.

Throughout the centuries under the changing political systems and rulers of the Roman Empire, Catania generally experienced a good time of growth. In the 300s, Decimus Magnus Ausonius thus named Catania and Syracuse as the only Sicilian cities in his work Ordo Urbium Nobilium.

However, there were also times of difficult times in the centuries surrounding the birth of Christ. In the year 121 BC the volcano Etna erupted in a major eruption, sending a lava flow over parts of the city that were partially destroyed. The extent of the outbreak caused, among other things, that the city was exempt from tribute to Rome for a period of ten years.

Vandals and Byzantines
The Roman Empire was eventually divided into the West Roman Empire and the Eastern Roman Empire, and with the fall of the Western Empire other peoples came and conquered the area. The same was true of Catania, where vandals plundered the city in 440-441.

Goths later established a government in the region before Catania in 535 was conquered by the Byzantine East Roman Empire, ruled from Constantinople. The Byzantine Governor of Sicily was given a seat in Catania, which emphasized the city's status. The city belonged to Constantinople until the 8th century.

Muslims and again Christian rule
In 831 the Muslim emirate Sicily was established and its capital became Palermo. Muslims had invaded the island from 652 and overcame the Byzantine forces in the period 827-902.

In the emirate, a mixed culture was established between Byzantines and Arabs. During this time, architecture and other things were developed with the culture with which the Muslim Arabs came. Public construction was also invested and land reforms were implemented.

The turning point came in the year 1071, when Christian Roger I of Sicily overcame the Muslims, thus giving Roger the keys to Palermo. The new regent was a Norman, and thus he was a Christian with roots in the Scandinavian Vikings. Roger I had been supported by southern Italian forces who would conquer Sicily.

The first period of Norman rule was marked by religious and ethnic tolerance, but that gradually changed as early as the 12th century, when many Muslims opposed the Latin influence of the area. Specifically, the population groups were geographically separated, and Catania in that context belonged to the Christian, northeastern Sicily.

The German-Roman Empire and the Pope
In 1194-1197 Catania was plundered by German soldiers under the King and Emperor Henry VI. In the following century, the German-Roman Empire came again to influence the city; This time, among other things, with Frederick II's construction of the castle Castello Ursino.

It was also at this time that Catania became a royal city unlike the diocesan government that had been established previously after the Christian reconquest of Sicily.

By 1266, the reign of Sicily had been subject to Charles I of Naples with the support of the Pope in Rome. The new regime came to the so-called Sicilian wasps, the name of a rebellion that took place in 1282. The background of the Vespers is the power struggle that took place between the German-Roman Empire in the form of the ruling Hohenstaufers and the Pope.

The rebellion The Sicilian Vesper broke out in Palermo, but Catania was also among the most important places during the rebellion that led the King of Aragon to take over as Peter I of Sicily; the ceremony itself took place in precisely Catania.

However, the battle between the Aragonese and the victorious Angusians who had supported the Pope was not over. Catania was elected by the Aragons as a royal city and also as the seat of the regional parliament.

The old Vesper dispute ended in 1347, when an agreement was made that incorporated Sicily into the Crown of Aragon. This led to a relative decline for Catania, whose status as political capital lapsed with the agreement.

16th century, Etna 1669 and earthquake
In the early 16th century, Castile and Aragon were united, making Sicily part of the Spanish empire. This made political power even further away from Catania and the rest of the island. It revolted both in 1516 and in 1647.

However, the biggest and most devastating event of the centuries for Catania first occurred in 1669 and in 1693. In 1669, the Etna volcano erupted in the largest eruption since the year 122 BC. The eruption started on March 11, and a lava flow flooded, destroying ten villages over the following weeks.

On April 15, the lava reached Catania's city walls, which proved so strong that much of the lava flow was diverted to the sea, and thus the city's port was almost completely filled. However, a part of the city wall succumbed, and the lava destroyed some houses before it solidified.

In 1693, a new disaster occurred in the form of an earthquake that struck large parts of the Sicilian east coast, and thereby also Catania. It is estimated that about one-third or 60,000 inhabitants lost their lives in the quake. Colossal building damage was also a result and the city had to be rebuilt.

In the wake of the earthquake, Catania was rebuilt in the so-called Sicilian Baroque, which clearly puts its mark on the city to this day. The building materials were largely the lava from Etna.

Catania in the new Italy
18th century and the first half of the 19th century was a period without significant development in Catania. Politically, the city became more important in the 19th century in terms of its new provincial capital status.

In the middle of Italy, a united Italy also came closer, and Catania and Sicily also entered into it. was ruled by bourbons.

Garibaldi successfully conquered Sicily, thus paving the way for the whole of Italy. Catania became part of the new country in 1861.

20th Century to Today
During World War II, Catania was exposed to several bombings. They started on June 5, 1940, and in total about 100,000 of the town's inhabitants had to be evacuated to nearby villages due to the bombs. On August 5, 1943, the Germans evacuated Catania, and instead a British army arrived.

After the end of World War II, Catania and the rest of the country became part of the new Italian republic, which later became one of the founders of what later led to the European Union. Throughout the latter half of the 20th century, Catania experienced changing times of growth and stagnation, respectively, which were in contrast to the economically stronger Northern Italy.

Today, Catania is a city that, among other things, caters to many cruise tourists, who will, among other things, take a closer look at the city's beautiful Baroque buildings, atmosphere and proximity to historical settlement and the majestic volcano Etna.
Skjul indhold her 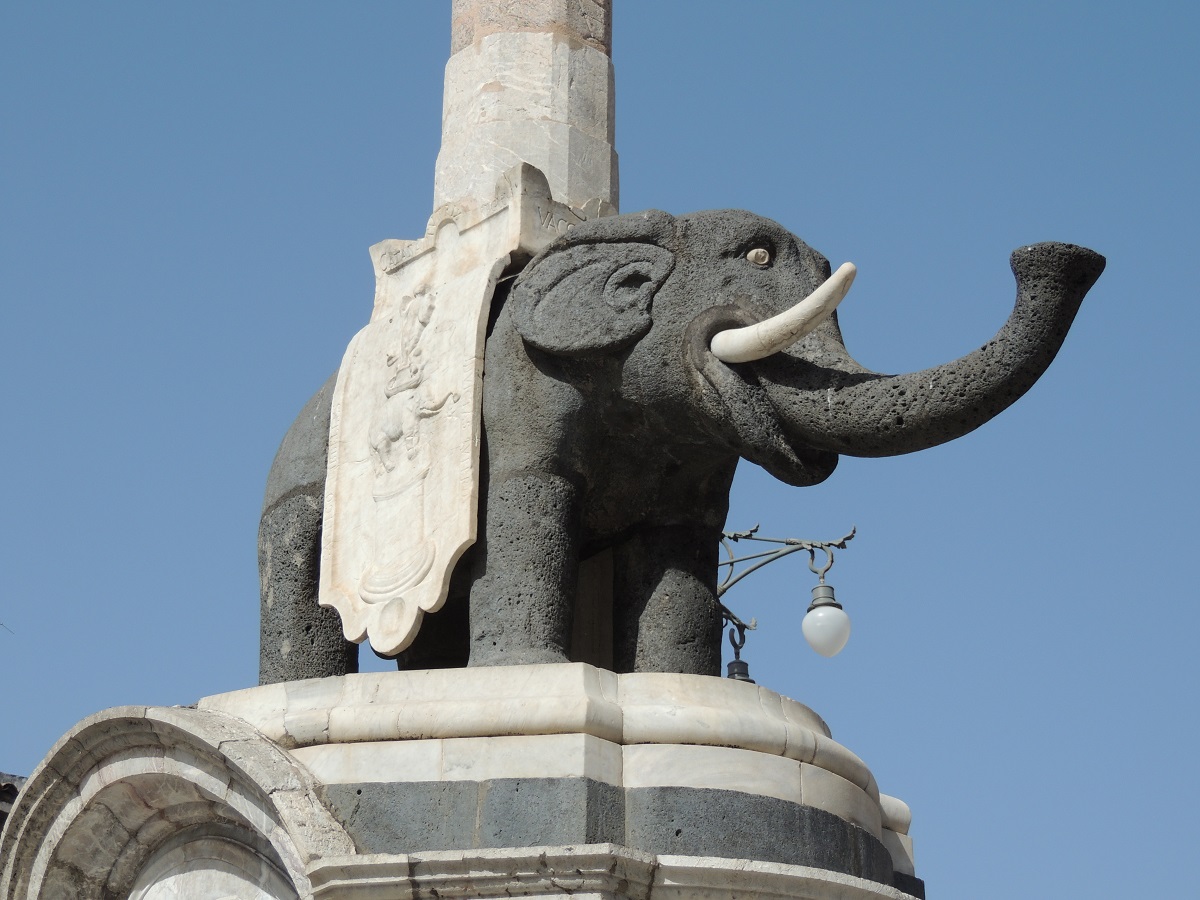 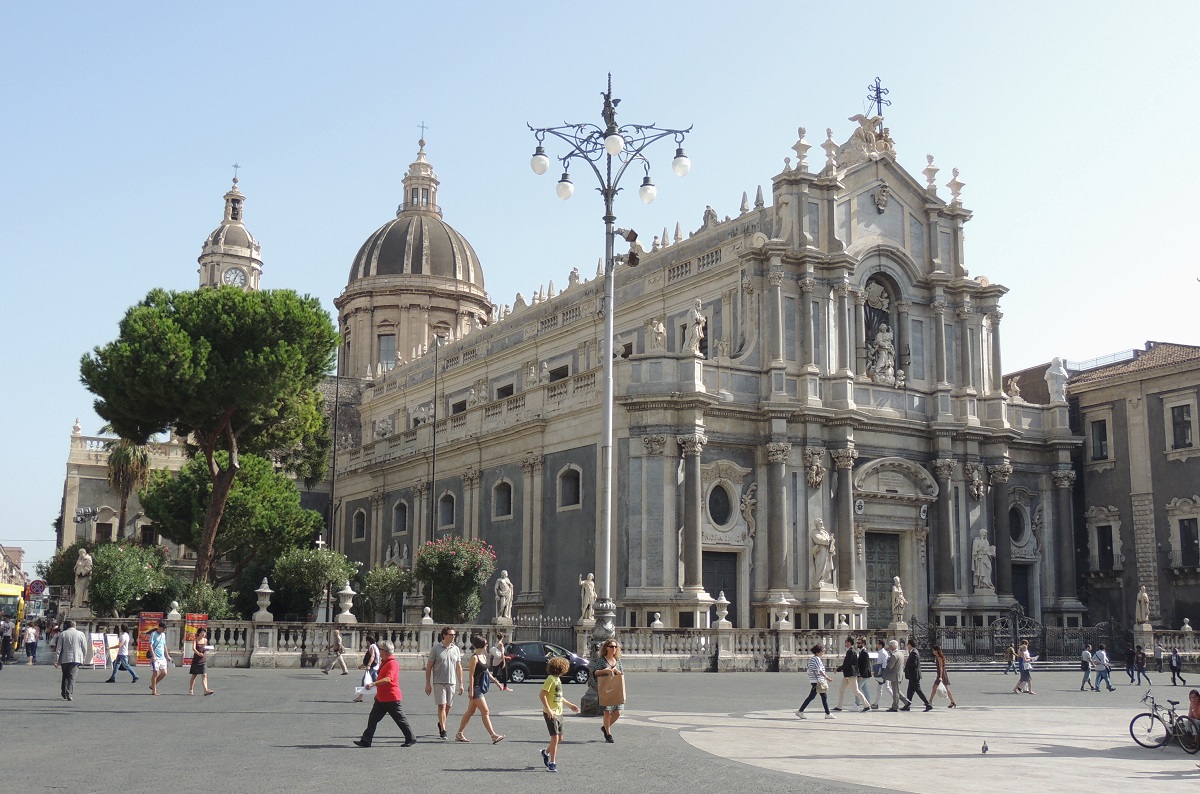 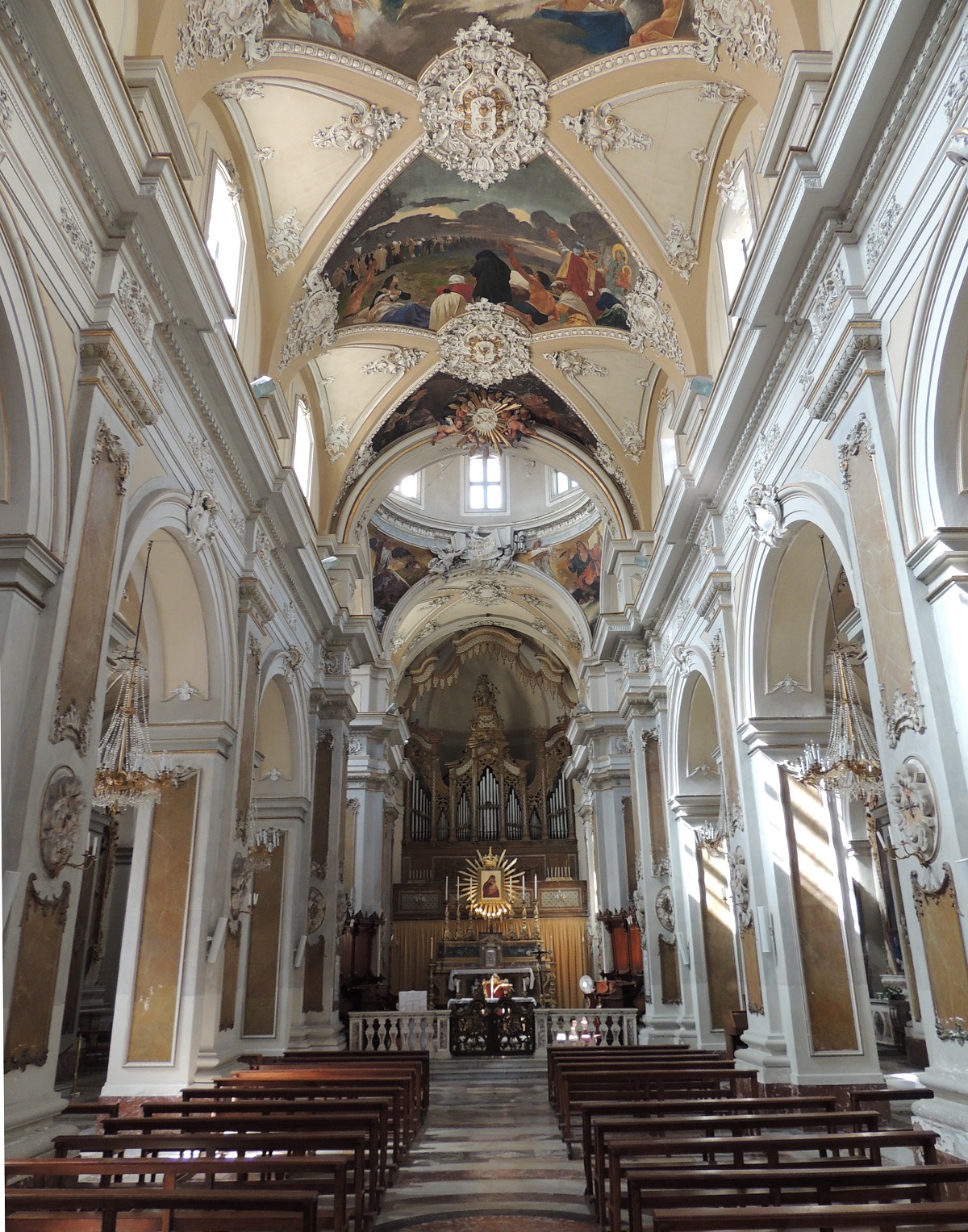 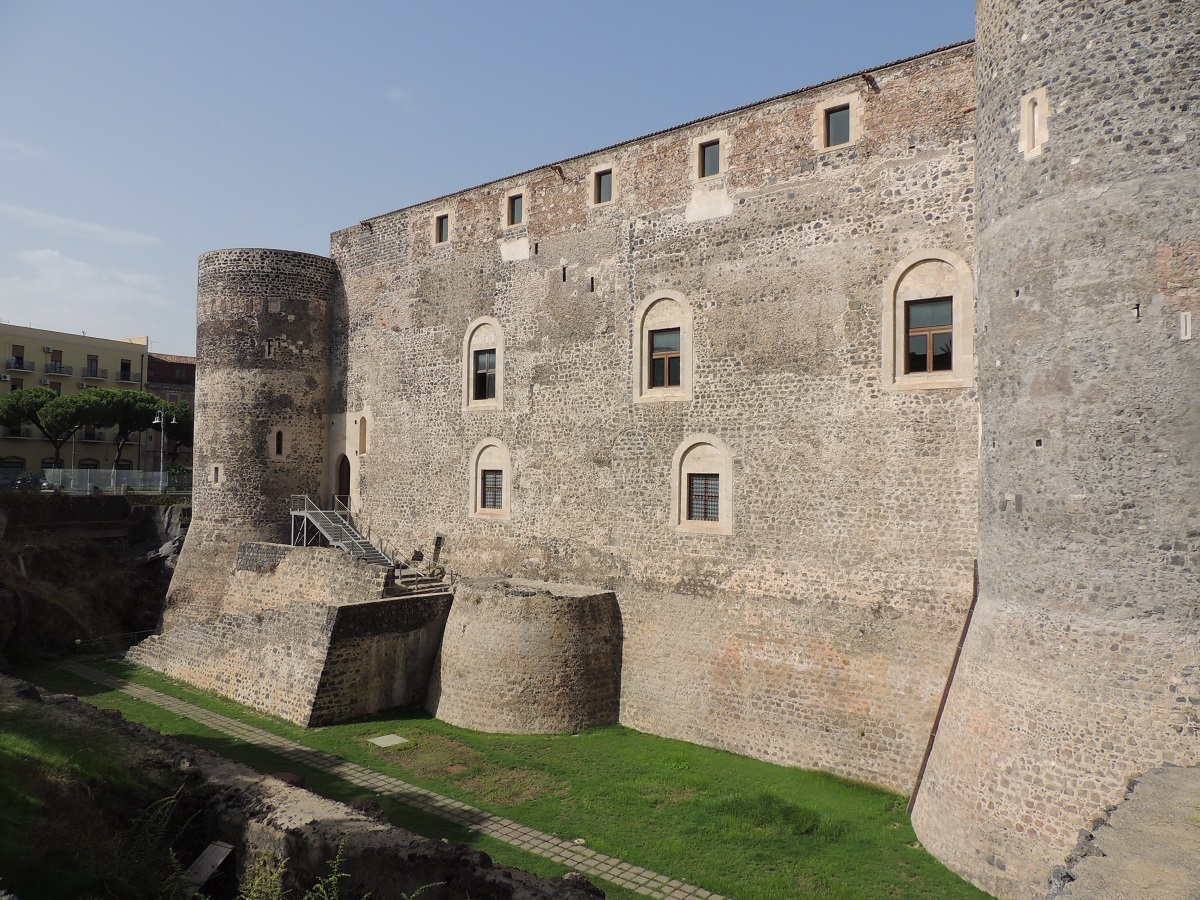 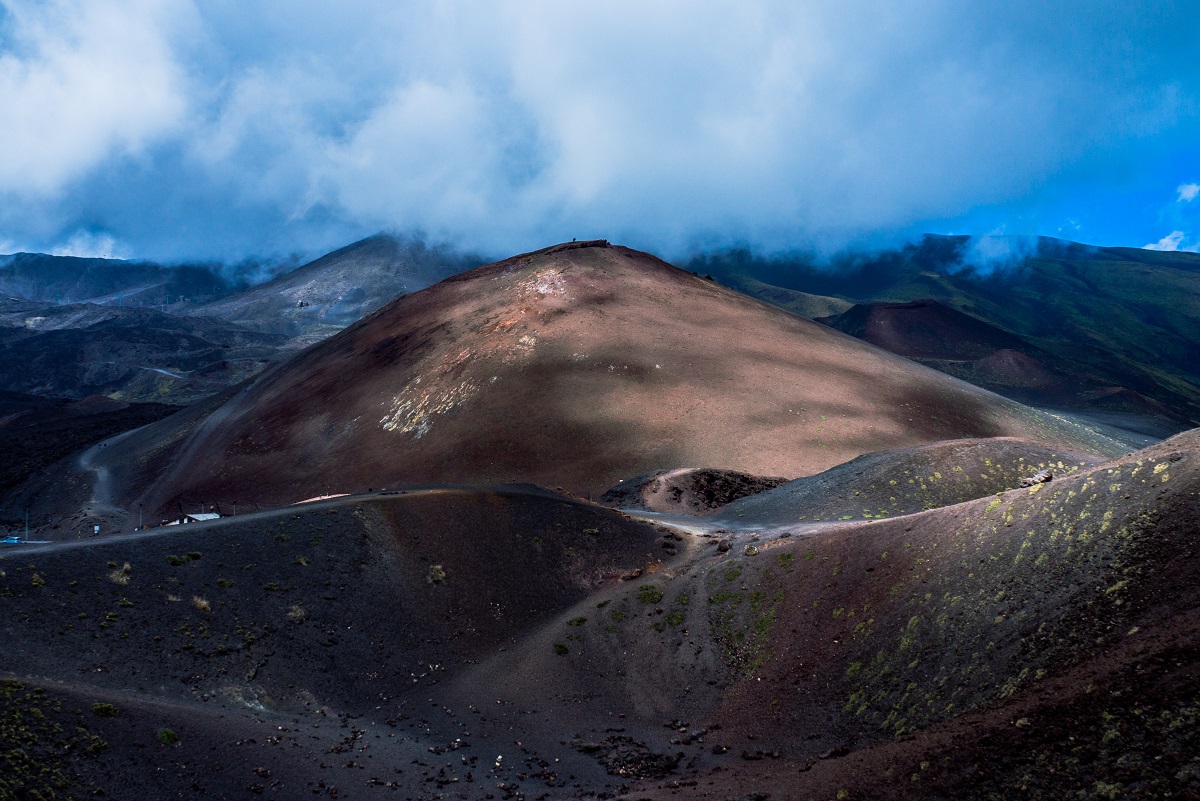 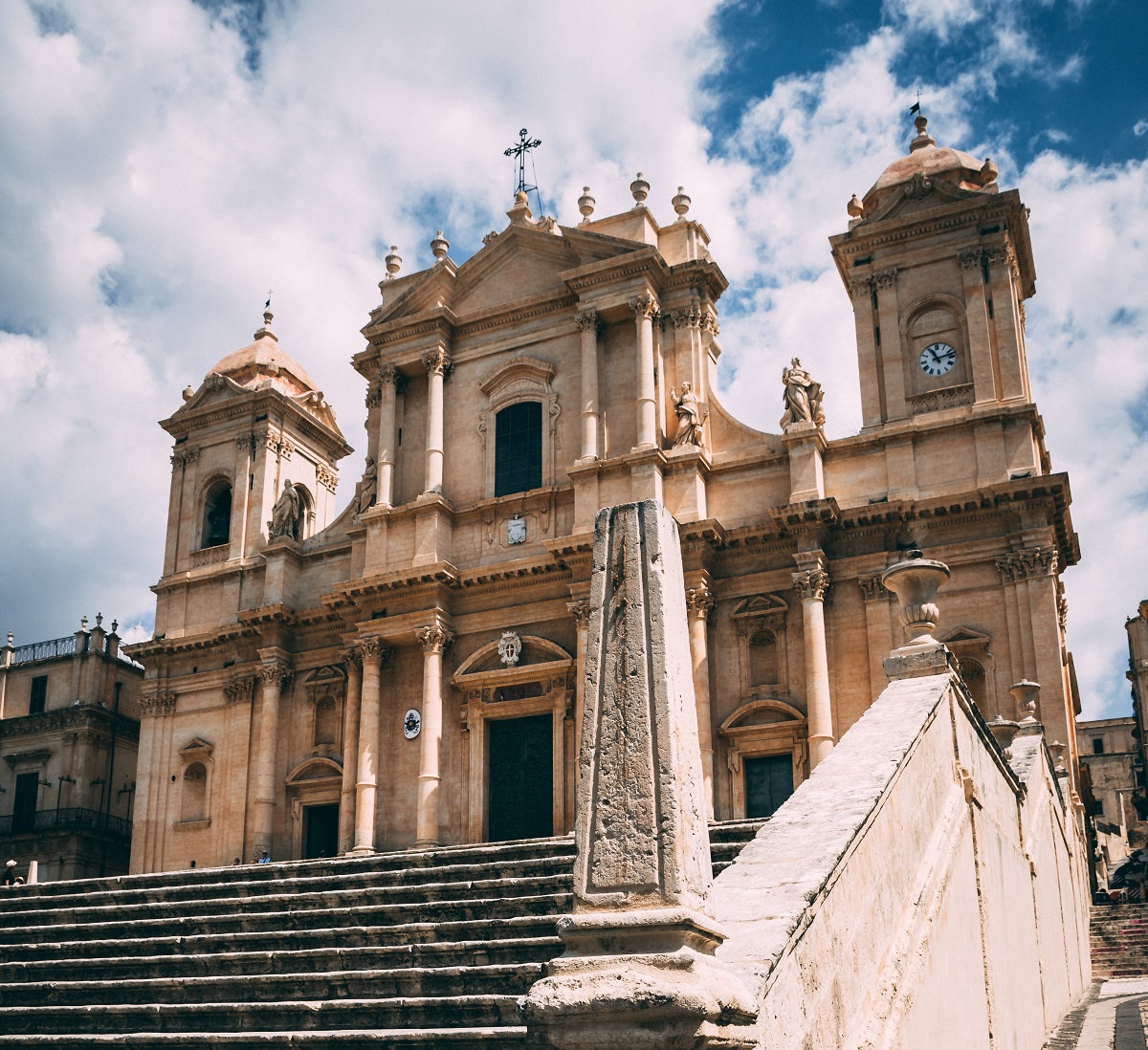 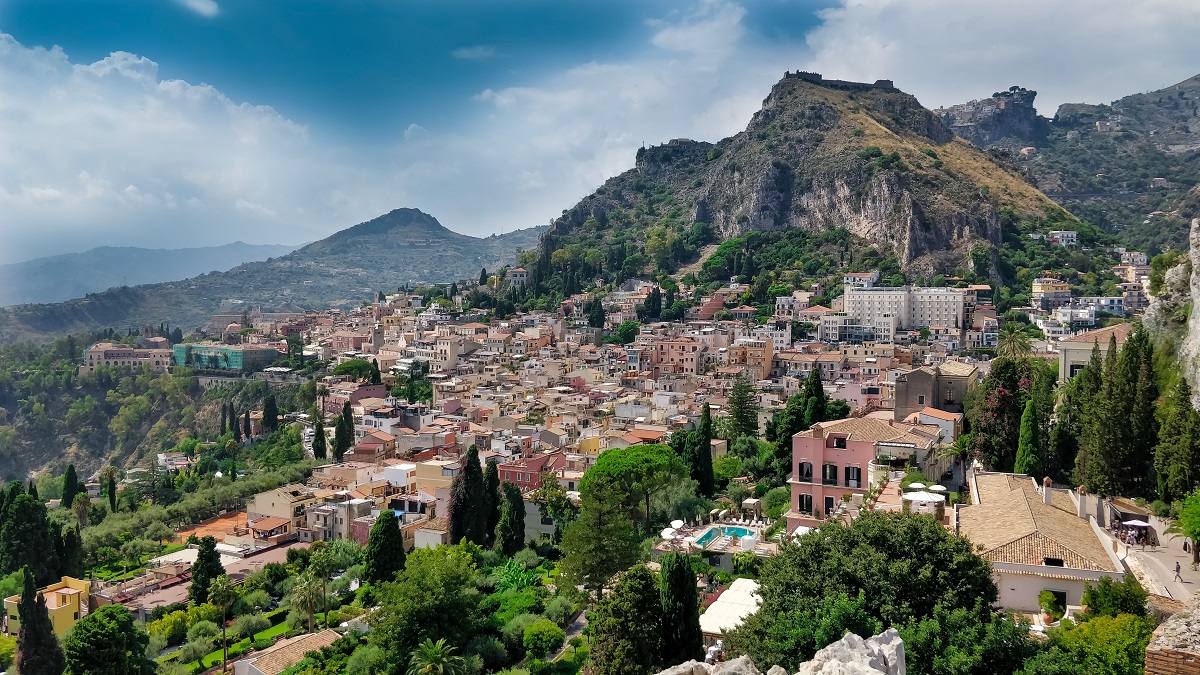 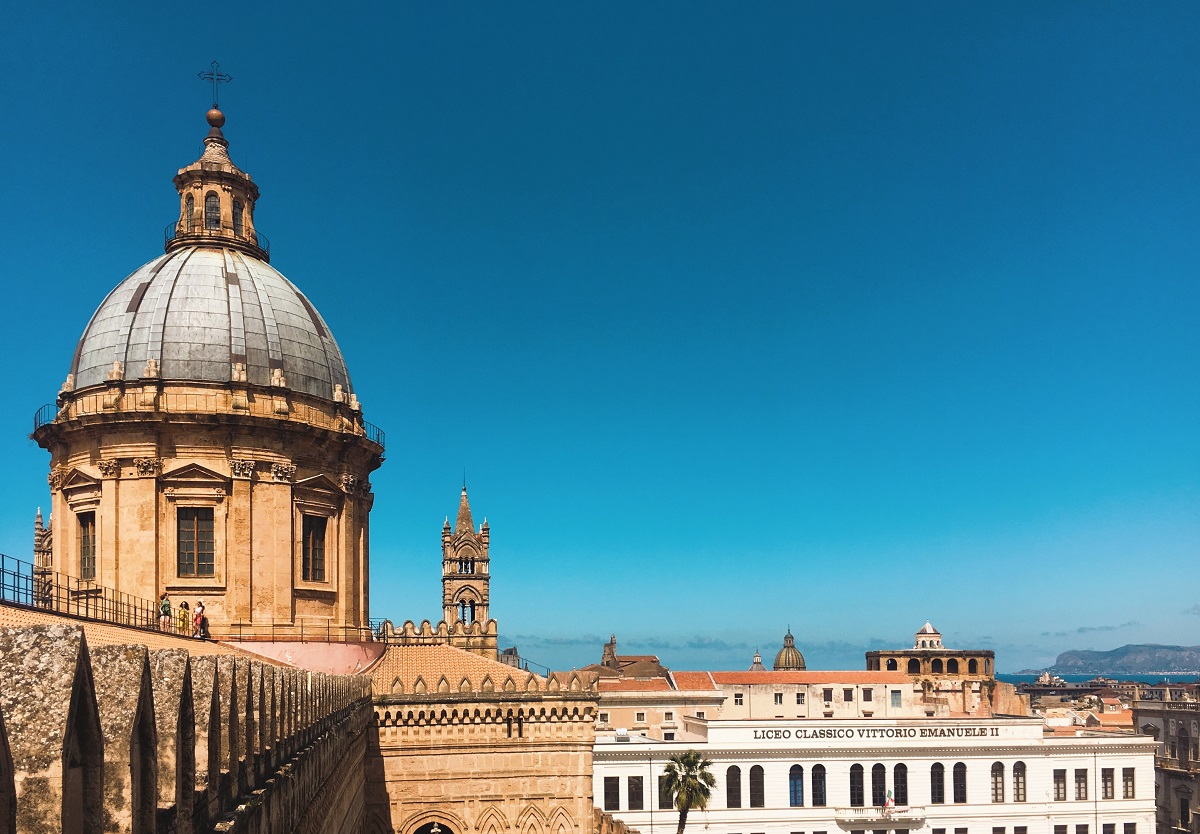