The old town of Tbilisi is cozy and characterized by crooked streets, narrow alleys, old buildings and the very elegant balconies that break the facades at some buildings in the area. Beautiful churches are also here in great numbers on both sides of the river Kura that winds through the city.

Parks and promenades are situated along the Kura, and from here there is not far to the city's sights to the east and west. The mighty Trinity Cathedral, along with the presidential palace, stands on the slopes to the east, while the main street of Rustaveli Avenue starts at the city's freedom square to the west. Splendid buildings can be seen at the avenue, one after another and among them many well-known state institutions.

It is also possible to enjoy a tour of the old mineral baths in Tbilisi. And if you want to see it all from above, both the Nariqala fort and Mtatsminda mountain are good choices where to see unforgettable panoramic views. From these places you get a good impression of how Tbilisi is located between mountains.

Mountains and beautiful monasteries are part of what awaits as you go on trips from Tbilisi, and in the town of Gori you can learn more about the Soviet Union leader Joseph Stalin, who was born here. 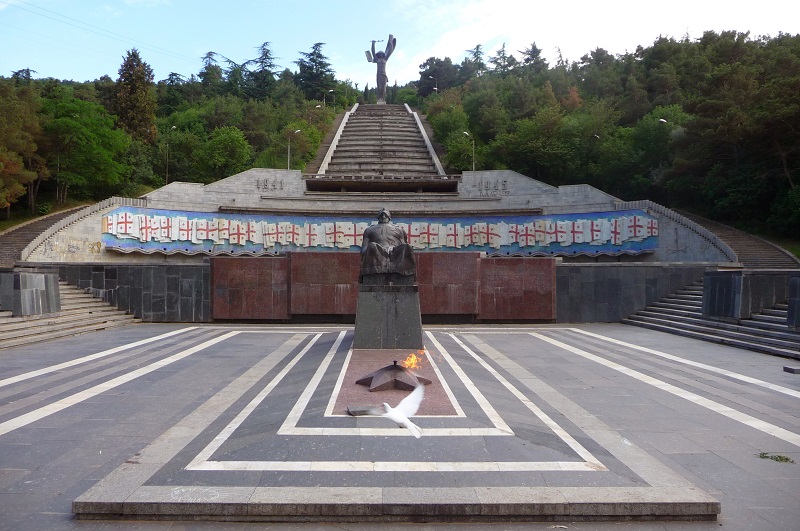 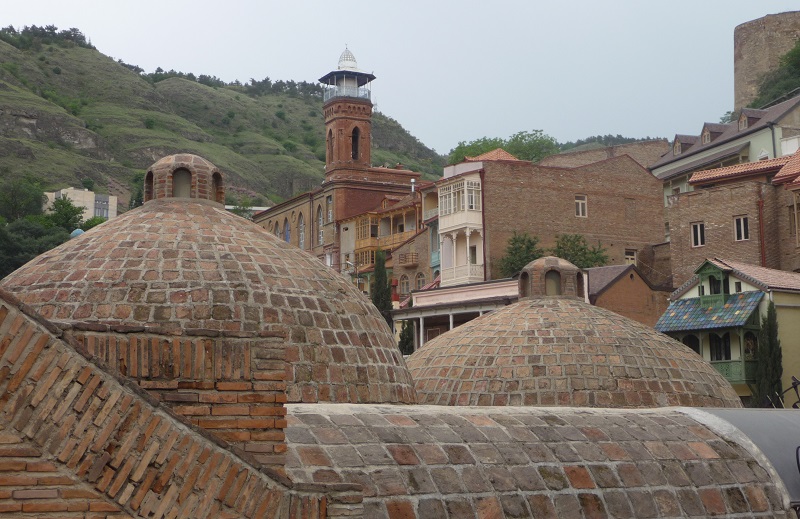 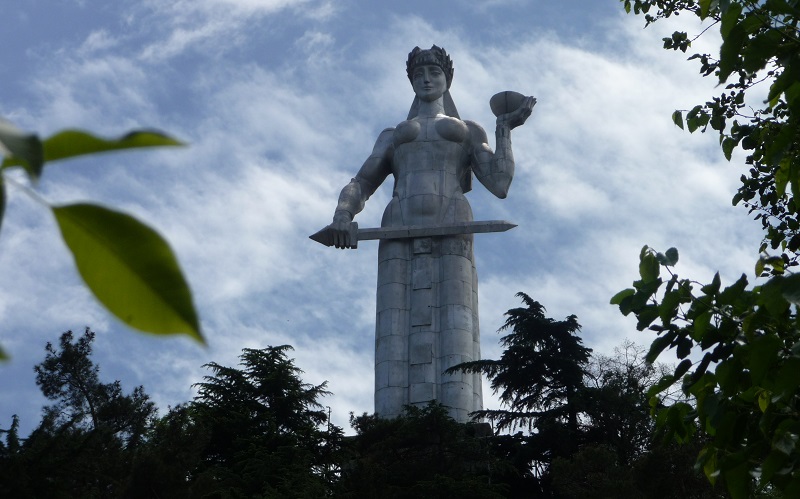 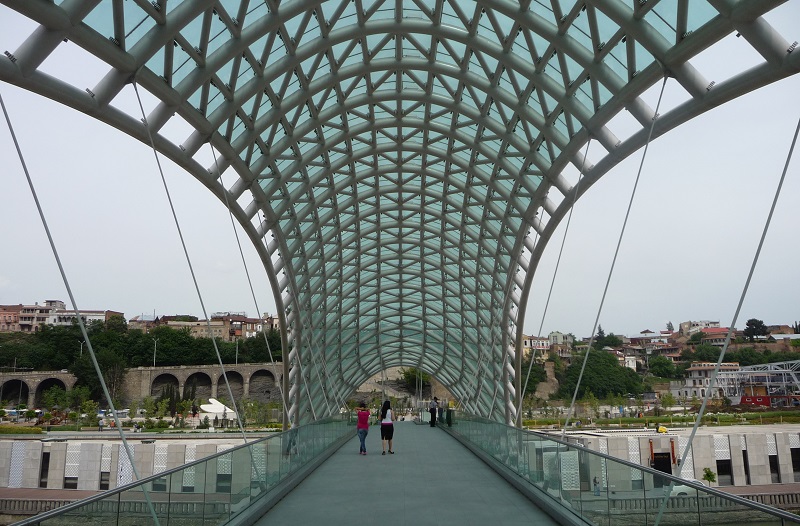 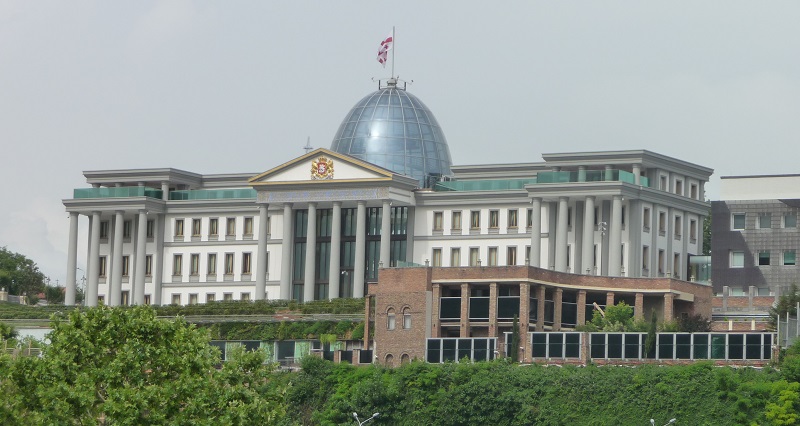 Beginning of the City
Archaeological studies indicate that the area around Tbilisi has been inhabited for millennia, while the actual history of the city began in the latter half of the 300s with King Varaz-Bakur's fort on the site. The fort fell quickly into Persian hands before being subjected to Georgian kings in the 400s.

King Vakhtang In Gorgasali, Tbilisi expanded during his reign in the 400s. However, according to tradition he founded the city in 458. It was said that he was hunting falcon in the forests here. During the hunt, the king's falcon caught a pheasant, and both birds fell into a hot spring and died. Thus, the site of Tbilisi should have been chosen, and the name Tbilisi also refers to the old Georgian Tpili, which means heat with reference to the sources in the area.

After Vakhtang I Gorgasali, King Dachi I Ujarmeli took the throne and moved the capital from Mtskheta to Tbilisi, as the previous king had wished. Dacha In Ujarmeli expanded the city, which as its capital grew steadily; not least because of its favorable location on trade routes between Europe and Asia.

Foreign influence
The city's central location in the Caucasus on trade routes between Europe and Asia, however, also led to other than favorable growth opportunities; for example, the region's powers came to take over or influence the country in turn; generally, however, with substantial autonomy.

Byzantine, Persian, and Seljuks were just some of the people and powers that sought dominance with Tbilisi and this area of ​​Georgia. Culturally, they had a major influence on the development of the city, and governmental power often shifted from the 500s.

At the end of the century, Persia captured Tbilisi, and in 627 attacked, among other Byzantine armies. In the 730s, Arab armies conquered the city and their rule continued in various forms until 1050, despite Georgian attempts to bring back the Arabs.

The Georgian Renaissance
After fierce fighting against the Turkish seljuks, a numerically inferior Georgian army prevailed under the country's King David in 1122. Thus, both western and eastern Georgia with Tbilisi were free after many centuries.

King David made Tbilisi the capital of the united country, thereby moving his own residence from Kutaisi. With the new status, Tbilisi flourished through the 1100-1200s and became a regional power factor and economic center.

Culturally, too, Tbilisi marked itself and it had grown to about 120,000 inhabitants. Among them was the author Shota Rustaveli, who in this Georgian golden age wrote his famous poem The Knight in the Tiger Skin.

Mongols and other conquerors
After more than 100 years of Georgian freedom and independence, the country came under the control of the Mongols in 1236 after their defeat, although the country of Georgia continued as its own unit. Both politically and culturally, the country was influenced by the Mongols forced out of the country in the 1320s, after which an independent Georgia again emerged.

The Tbilisi of the 1300s-1700s was characterized by many changing conquests of the city and the country, and over the centuries Persians were among the most frequent in the area and later also the Ottomans of Turkey.

Despite several successful liberations of the capital under several Georgian kings, the Persians remained a strong opponent, and following Tbilisi's fire in 1795, King Erekle sought assistance from Russia.

1801 and the Russian Empire
The Georgian kingdom became part of the growing Russian empire in 1801, and Tbilisi became the administrative capital of the new government for the region.

As part of Russia, Tbilisi flourished rapidly and investment was made in the city. Many newbuildings shot up, and roads and later railroads were constructed as connections to other parts of the empire; eg to the nearby cities of Baku and Yerevan.

Tbilisi became one of the cultural and economic centers of the Caucasus, and many notables came to town; for example, Alexander Pushkin and the Russian Zar family, Romanov, who built their Caucasian residence on the city's main street.

Independence and the Soviet Union
Following the Russian Revolution in 1917, Tbilisi became the capital of the Transcaucasian Republic in 1918. It was in the former Russian royal palace that in May of that year Georgia, Armenia and Azerbaidjan declared their independence as three nations.

Until 1921, Tbilisi was the capital of the Republic of Georgia, and during those years a number of national institutions such as the city's State University were established, which saw the light of day in 1918.

On February 25, 1921, the Soviet Red Army penetrated Tbilisi, making Georgia part of the Soviet Union. In the beginning, Tbilisi was the capital of the Transcaucasian SFSR, but after the division of the area into several Soviet republics, the city again became the Georgian capital.

Throughout time as part of the Soviet Union, the nation's apparatus of power was concentrated in Moscow, and several Georgian politicians made their mark on the development; not least Josef Stalin, who took power after Lenin's death and maintained it until his death in 1953.

New independence
With the dissolution of the Soviet Union, Georgia declared its independence, and Tbilisi again became the capital of an independent Georgian country. In recent years, the economy has been continuously improving, and large investments have been made in Tbilisi, which has also experienced increasing tourism.
Skjul indhold her 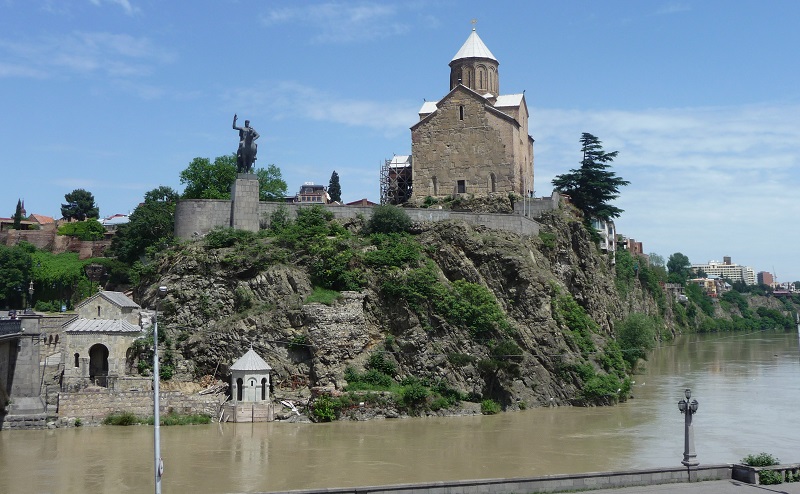 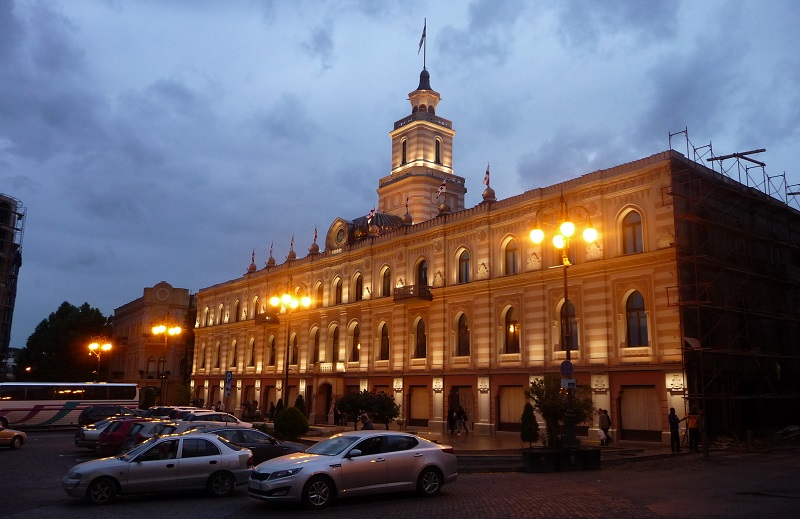 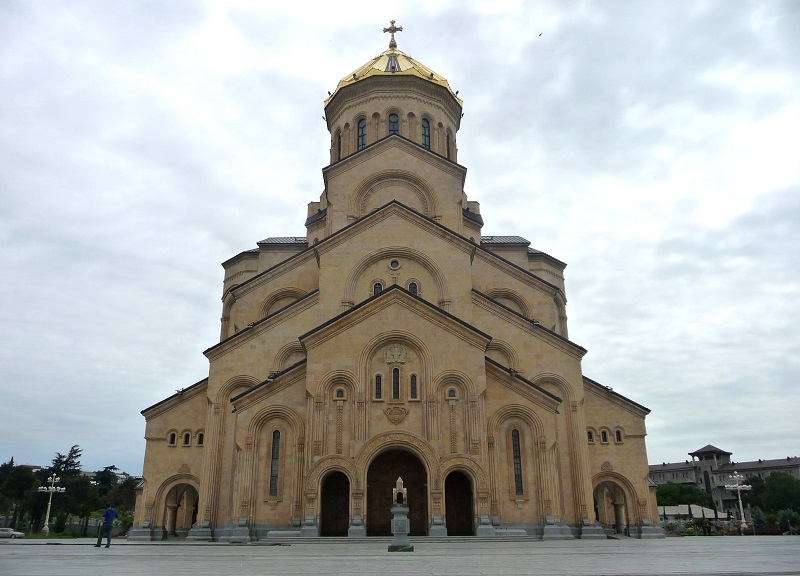 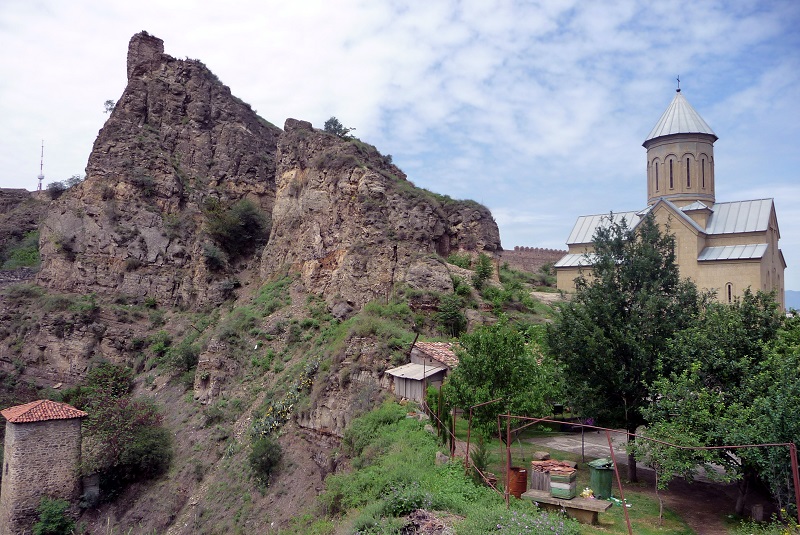 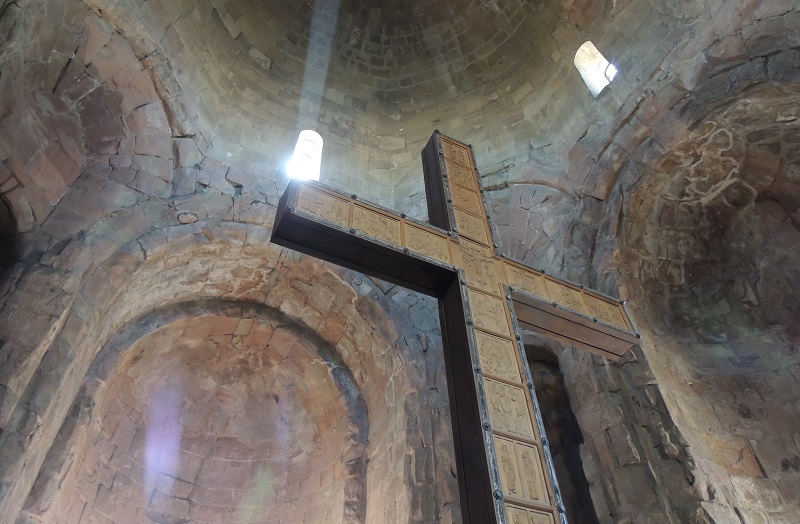 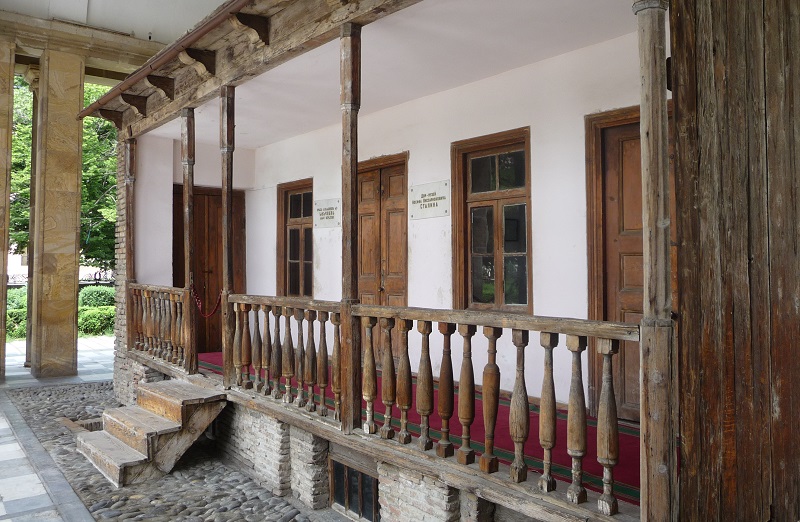 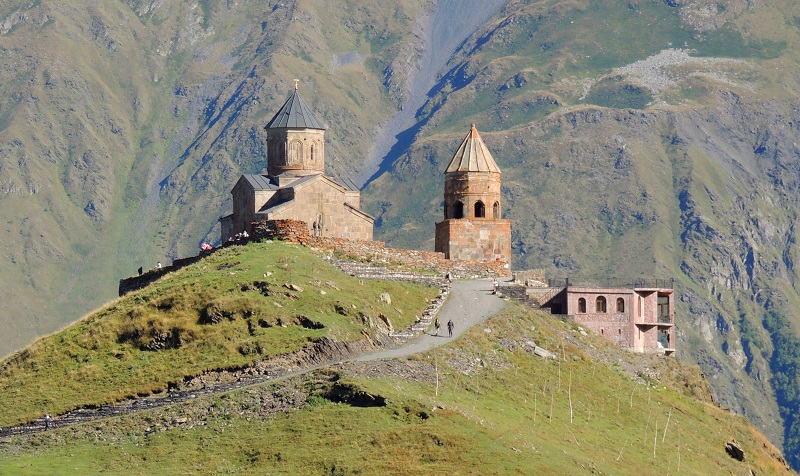