Washington is the capital of the United States, and from the beginning it was thoughtfully designed in the best American style. The city is unlike any other city in the United States and the world, with its many splendid buildings, political power centers, large memorials, outstanding museums and not least known buildings from countless TV broadcasts in worldwide news and from varies movies.

A walk in Washington will undoubtedly seem exciting and familiar to many who can not recognize scenes from film and television. For example, the National Mall's lawns are like a jump into television news. All places seem familiar, not least the White House and the Capitol. Many other places such as the FBI building can also be easily recognized. Along the way you discover a lot of other interesting sights as well.

Washington's national museums, which are assembled under the Smithsonian Institution, are all among the most prestigious of its kind in the world, and the rich collections make visits particularly enriching. It goes for everything from American history and art to the capital's unique aviation and aerospace museum.

Washington also offers neighborhoods from old days such as especially Georgetown and various streets around downtown. National Cathedral gives the same impression; strongly inspired by European cathedrals. It is also just a boat or train ride to places like Alexandria, which form an interesting contrast the grand and modern Washington. 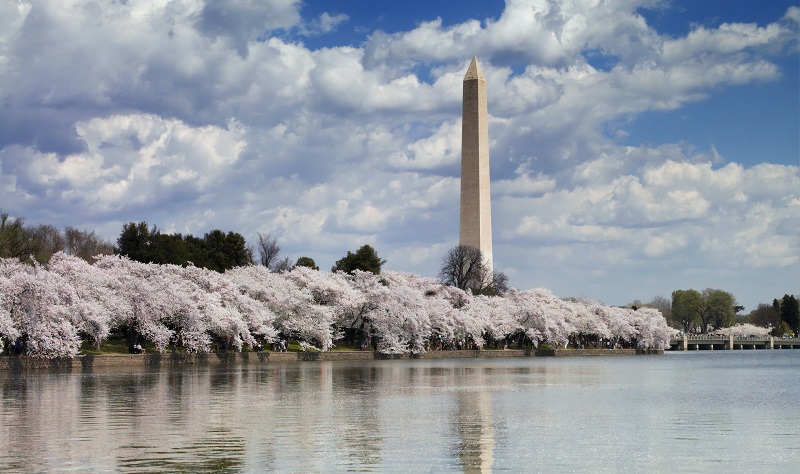 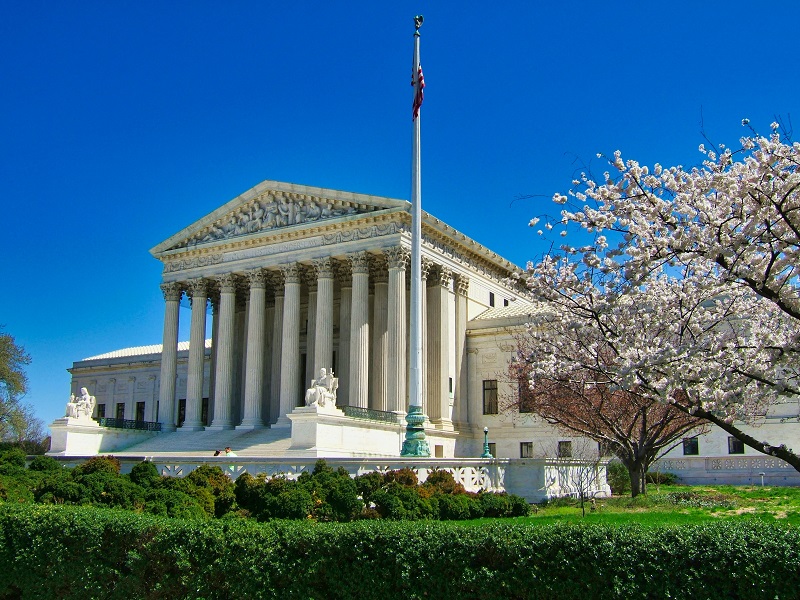 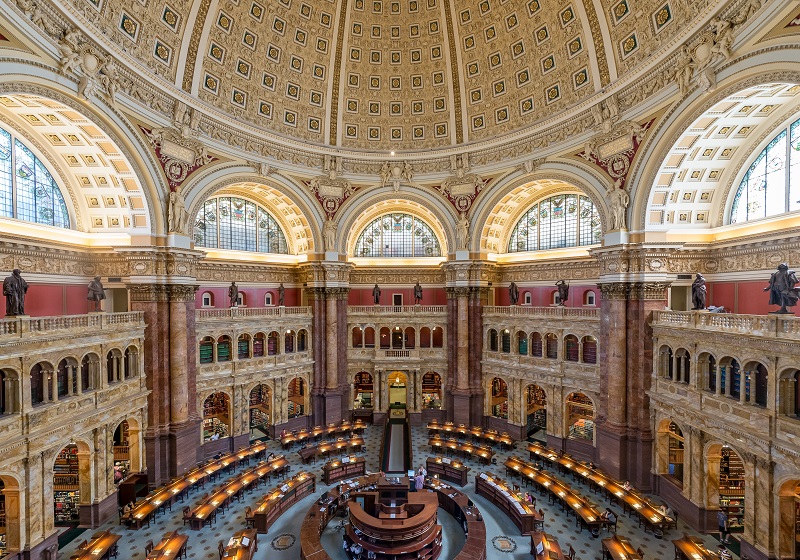 European start
The colonization of the North American territory led to the settlement of present-day Washington being inhabited from the 17th century. At that time, there were already people from the tribe of Nacotchtank, who, however, largely left the area in time for the beginning of the 18th century.

In 1751, the Maryland Assembly decided to found a new city on the Potomac River. A plot of land was purchased from landowners George Beall and George Gordon, and they named the town Georgetown. Initially, 80 building lots were minted, and thus the start shot went to what later became a suburb of the upcoming US capital.

Washington Founded
Throughout the first year of the United States, Philadelphia was the nation's capital, but after a rebellion in the state in 1783, it became clear to the nation's leaders that the capital had to be located in an area that was not subject to one of its states.

On July 9, 1790, the United States Congress passed the so-called Residence Act, which included the decision to establish a national capital on the Potomac River. President George Washington signed the agreement July 16, and he was to pinpoint the exact location of the new city.

The president wanted both the city of Georgetown from 1751 in Maryland and Virginia's Alexandria, founded in 1749, to be within the new metropolitan area.

The states of Maryland and Virginia both donated land to the federal capital, which, from the beginning, did not belong to any states. The metropolitan area measured 10 miles on each link with axes north-south and east-west. The area was a total of 260 km2 .

The grand city plan
The land area of ​​the capital was called The Territory of Columbia, and the city was named after the first president; Washington. When the Residence Act was passed in 1791, due to George Washington's land holdings near Alexandria, Virginia, it was decided that the public facilities in the capital could only be located east of the Potomac River and thus in Maryland.

The new capital was now to be constructed, and French engineer Pierre Charles L'Enfant was set to develop an overall urban plan for the central parts and public administration. In 1791 his plans were presented but due to various disagreements they were not adopted and L'Enfant was dismissed the following year. Instead, Andrew Ellicott adjusted L'Enfant's drawings, and as they became Washington's urban plan, the Frenchman's ideas were nevertheless brought to fruition.

Beginning of the 19th Century
In the year 1800, the seat of government was moved from Philadelphia to the new city of Washington, which thus became the concrete capital. At this time, 8,144 people lived in the city.

In 1802, Washington gained municipal rights, and the first electoral laws were passed. In this connection, the city got its first mayor, who was not directly elected, but was appointed by the president.

Further construction work by national institutions and implementation of L'Enfant's plans also progressed these years; among others, with the excavation of the low channel, the Washington City Canal, which connected the Anacostia River with Tiber Creek and thereby the Potomac River. However, the canal did not become a permanent part of Washington as it was covered later in the century after a long period of still less use.

Washington burns
The independence gained from the British was not completely stable, and during the British-American War in the years 1812-1815 Washington was attacked.

Many of the city's buildings, such as the Capitol and the White House, were burned, but despite visible devastation, the conflict was not prolonged. Prior to the attack, President James Madison had fled the city with federal forces.

The war officially ended with the Treaty of Ghent, signed December 24, 1814. The treaty returned to pre-war borders, giving the Americans back some land otherwise conquered by the British. The war thus ended without actual victories; with the exception that Canada remained free of treaties, thus avoiding future US attacks.

New laws and continued growth
1820 became the year when new laws for the capital came into force. The city's residents were now given the opportunity to elect their mayor by direct election.

The railroad came to the city from 1835, when a line between the capital and Baltimore was opened, and access to and from Washington became much faster for a number of cities, and over the years the rail network further developed with more connections from Washington.

In 1846, the metropolitan area, District of Columbia, city limits were finally established. This was the result of a decision to return the district of Alexandria to the state of Virginia, which was partly due to the decision not to build the capital west of the Potomac River. In addition, Alexandria had been disadvantaged financially over Georgetown and Washington itself, so the return to Virginia had also been supported by a referendum in Alexandria. The city became part of Virginia from 1847.

In 1846, Washington's largest cultural institution, the Smithsonian Research and Museum Complex, was founded. Since then, the institution's rich collections have been continuously expanded, and over the years several museum buildings have been erected, and today it is one of the world's foremost museum complexes.

However, despite Washington's status as the capital and the many new builds, the population did not increase dramatically in numbers through the first half of the 19th century. In 1820, there were 23,336 people living here, which had risen to 51,687 in 1850.

The federal capital of the Union was still called Washington, and it was on the border between the southern and northern states. Virginia on the opposite bank of the Potomac River was part of the new nation, while Maryland, despite a slave state status, remained in the union. The southern capital of Richmond was also quite close to Washington.

During the Civil War, in 1862, slavery was abolished in Washington's territory. In July 1864, the Southern Army launched an attack on the city, the so-called Battle of Fort Stevens, and it became the only time in office that Northern State President Abraham Lincoln was present during actual combat operations.

Lincoln, in connection with the war, had established an independent military force for the capital's defense; Army of the Potomac, and the town was continually kept from a ring of forts.

During the Civil War, Abraham Lincoln had also allowed the construction of the new Capitol to continue as evidence of the country's continued and unbroken development.

The city booms
The American Civil War actually ended April 9, 1865, but not many days passed before Washington re-entered the country's history. On April 14, 1865, President Lincoln entered the Ford Theater, where he was shot. He died the morning after the gunshots.

The American Civil War had thus started a major population growth in Washington, changing the city from a relatively small American city to one of the country's major.

Despite its growth through 1860, Washington was still a city with many dirt roads and poor hygiene. It was a stark contrast to the city's many state buildings, and President Ulysses S. Grant rejected proposals to relocate the capital to ensure better conditions.

Instead, the Organic Act of 1871 was passed and it restructured governance in the metropolitan area. Two years later, the appointed governor, Alexander Robey Shepherd, initiated a series of large-scale public projects aimed at rapidly advancing Washington's development.

The plans were implemented, and despite large budget overruns with new governance as a result, much happened in just a few years. Among other things, the city's first motorized trams ran in 1888, and the Washington City Canal, which had almost become a sewer, was covered.

Capital City
The continued relocation itself required some new construction, and around 1900 Pierre Charles L'Enfants initially rejected plans from 1791, and urban planning again partially followed the over 100-year plan.

The new plan came into being in 1901 and named The McMillan Plan after the commission that created the revised plan for the construction of the National Mall in the area between the Capitol and the Potomac River.

The McMillan Plan created a grandiose area whose planning and surrounding buildings were partly inspired by European cities such as Rome and Paris and partly through monumental architecture to exude the greatness and ability of the United States. The plan transformed the central area of ​​the city from poor low-rise buildings to a number of large public buildings. The plan was largely implemented with completion in the early 1920s.

Washington's population peaked around 1950, when the population numbered the 800,000. Suburban expansion in Maryland and Virginia led to a relocation from Washington and the District of Columbia, but the entire area was continuously strengthened in population. In 1957, Washington became the first major city in the United States, with the country's black population becoming a majority.

In 1963, the Washington National Mall was the scene of a major human rights demonstration involving up to 500,000 people. This is where Martin Luther King delivered his famous speech for equal rights between races. He began with the words: "I have a dream".

Throughout the 1980s and 1990s, political steps were taken to make the District of Columbia and thus Washington the United States state number 51, yet without changing Washington's special status as a federal capital.

On September 11, 2001, he entered the history of the United States and also the Washington. Here, the US Department of Defense Pentagon, located on the west side of the River Potomac River, was partially destroyed by a terrorist attack carried out by a passenger plane.

Washington today
The American capital today is a beautiful meeting with the thoughts of its establishment in 1790, L'Enfant's urban plan of 1791, the grand and stately 19th-19th century buildings as well as modern infrastructure, art and high technology at the Smithsonian Institution's museums, among others.
Skjul indhold her 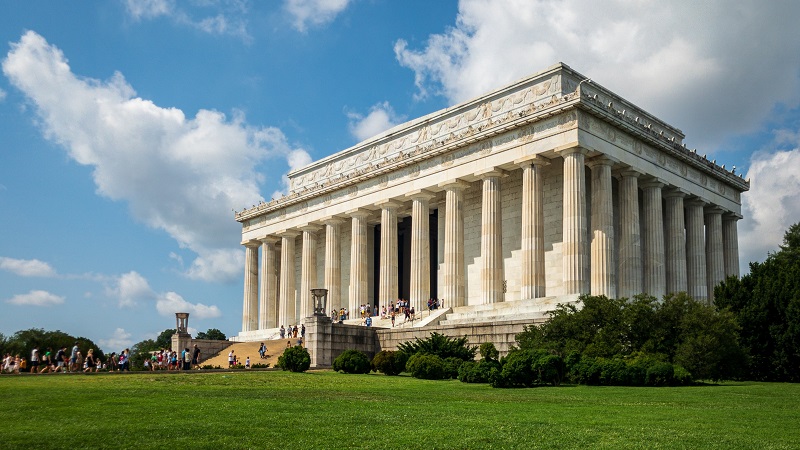 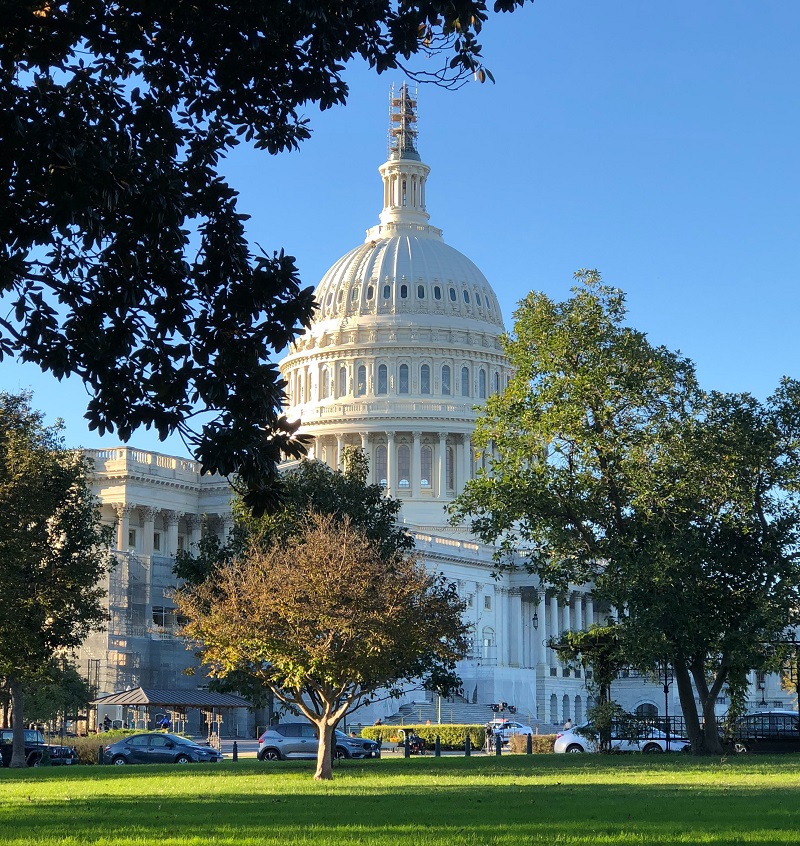 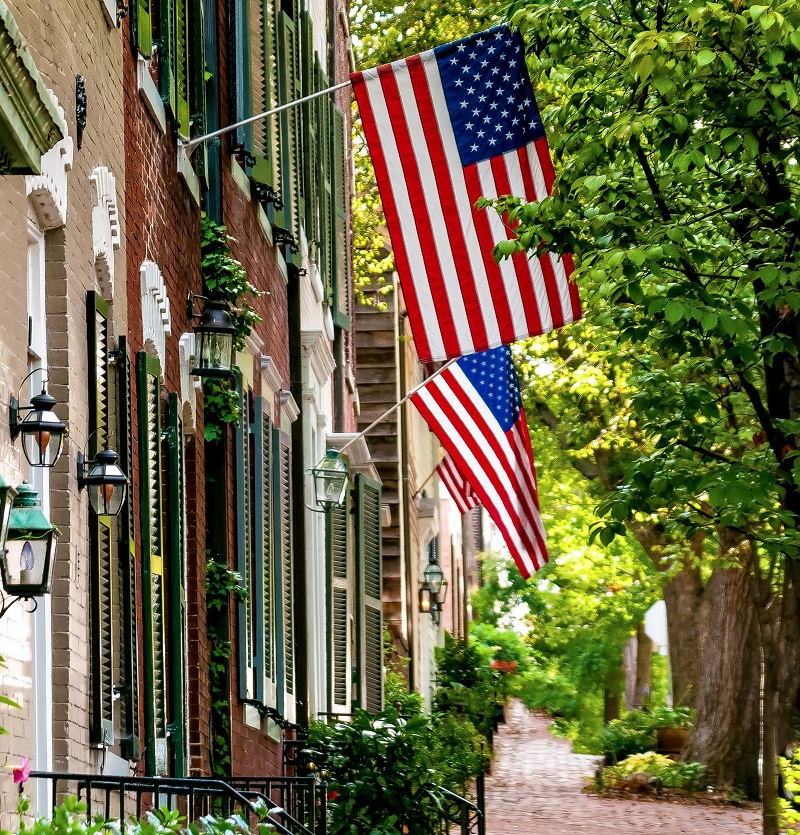 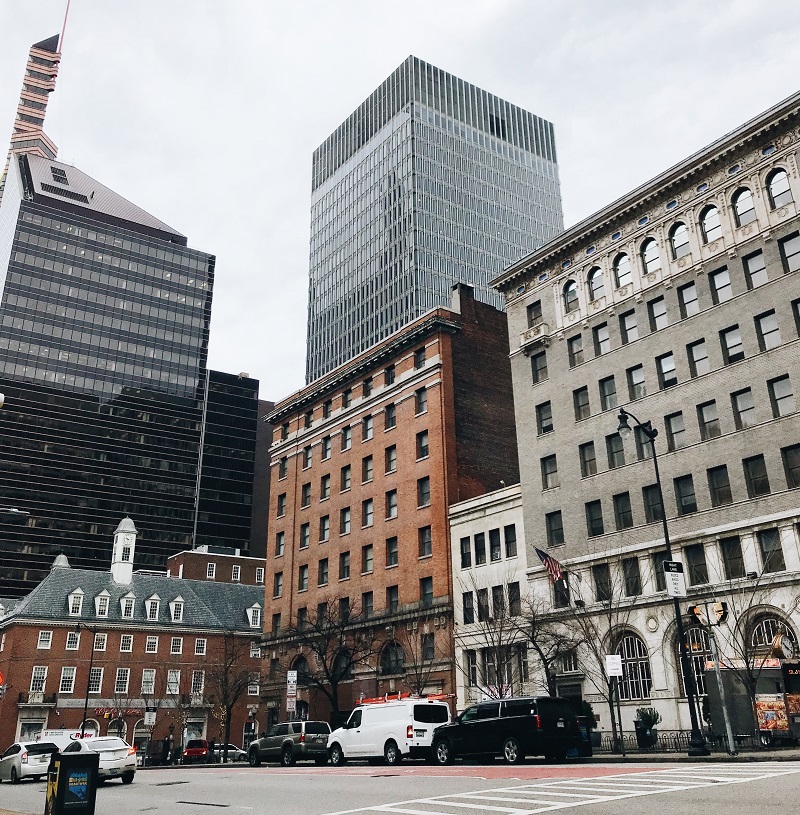