The Burmese metropolis of Yangon is one of Southeast Asia's great capitals when it comes to a great variety of architecture, an interesting culture and a delightful atmosphere. Sights are great as well, and accounts tell that the Shwedagon Pagoda stores relics of all four Buddhas of the present Buddhist Kalpa.

The city of Dagon emerged around the Shwedagon Pagoda, it later became Yangon and the British Rangoon from colonial times. This era is one that is particularly interesting in the center of Yangon, with one large and prestigious building after another from the late 1800s and early 1900s. Some of them are beautifully renovated, while others are nice to see with their many years of patina.

From the British colonial period, there are also lovely green squares, parks and lakes in Yangon, making the city's favorite recreational areas today. A few examples are the city's zoo and the areas around the artificial lakes north of the city center.

Myanmar became independent with the name of Burma in 1948, and since then Burmese culture has obviously left its mark on Yangon through traditions and activities at the beautiful Buddhist temples and pagodas, of which Shwedagon is the largest and best known. In fact, Shwedagon is unique to the world and number one sight to see in the city. 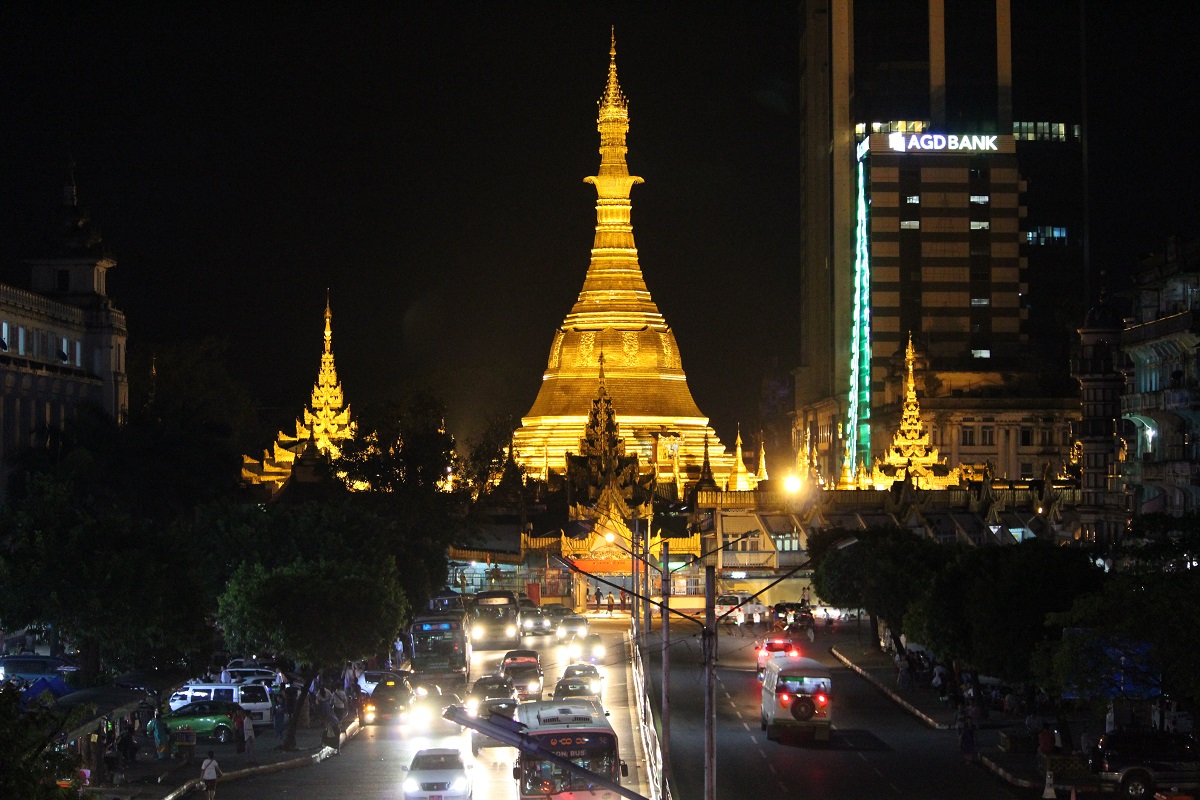 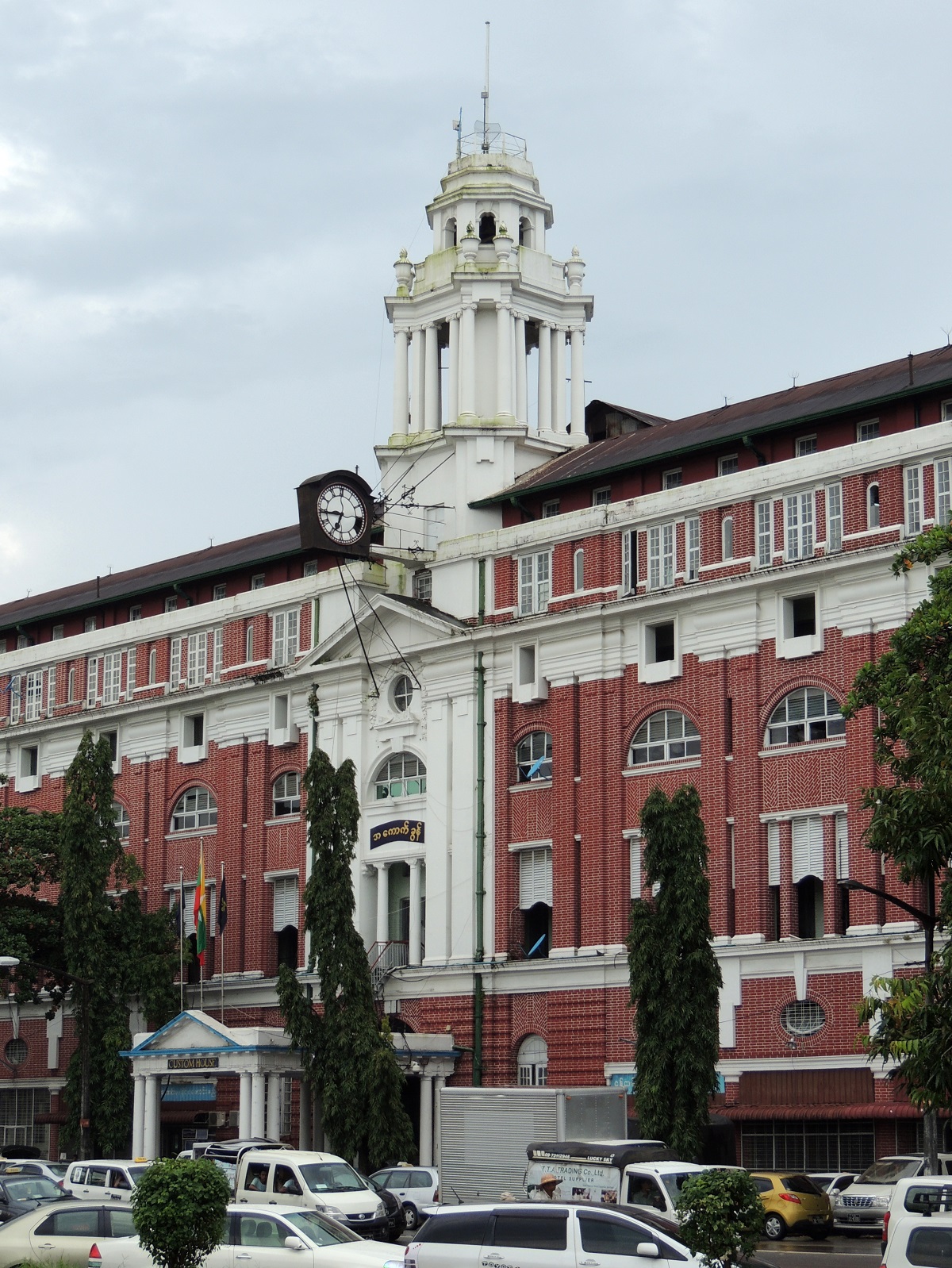 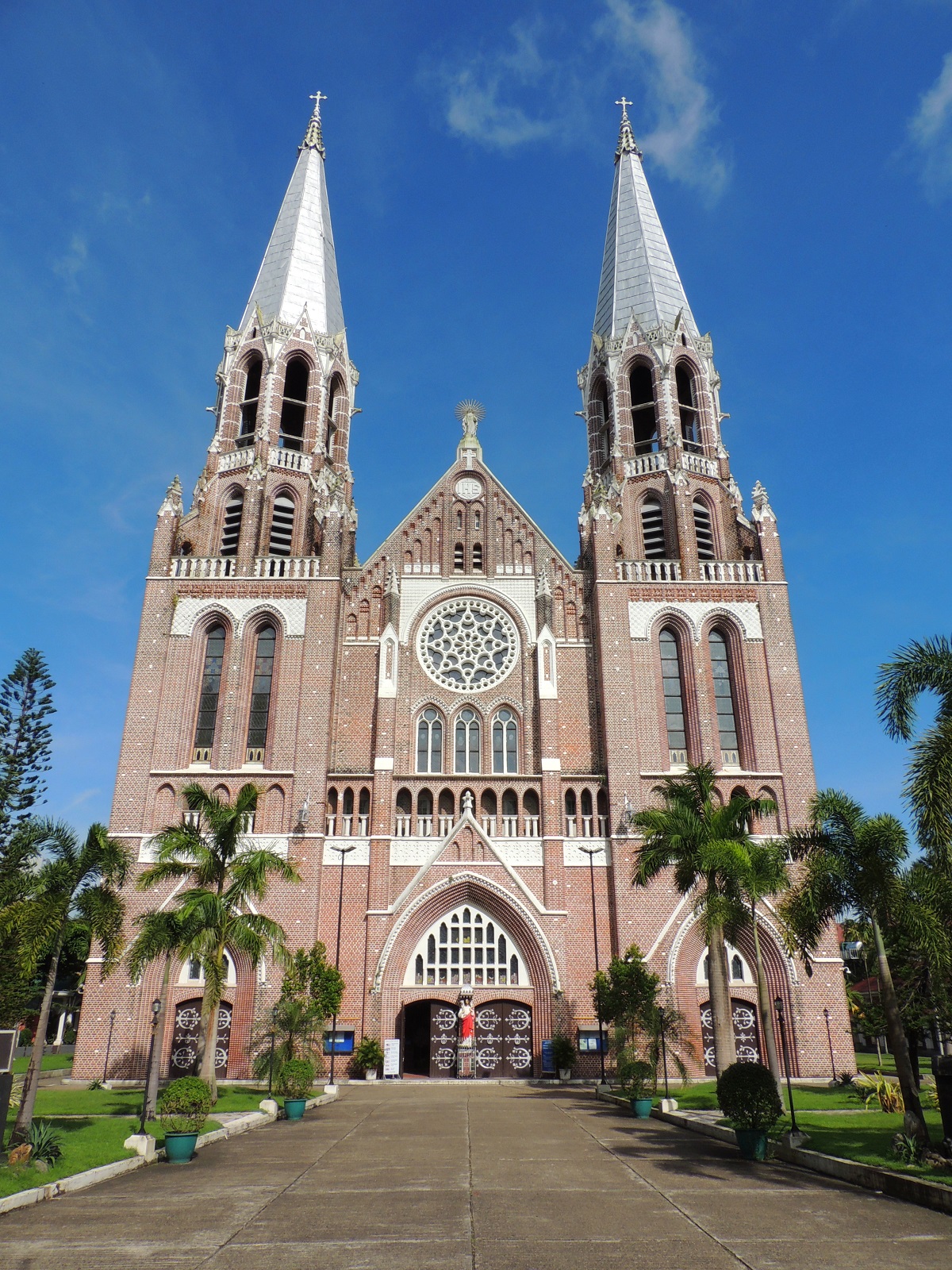 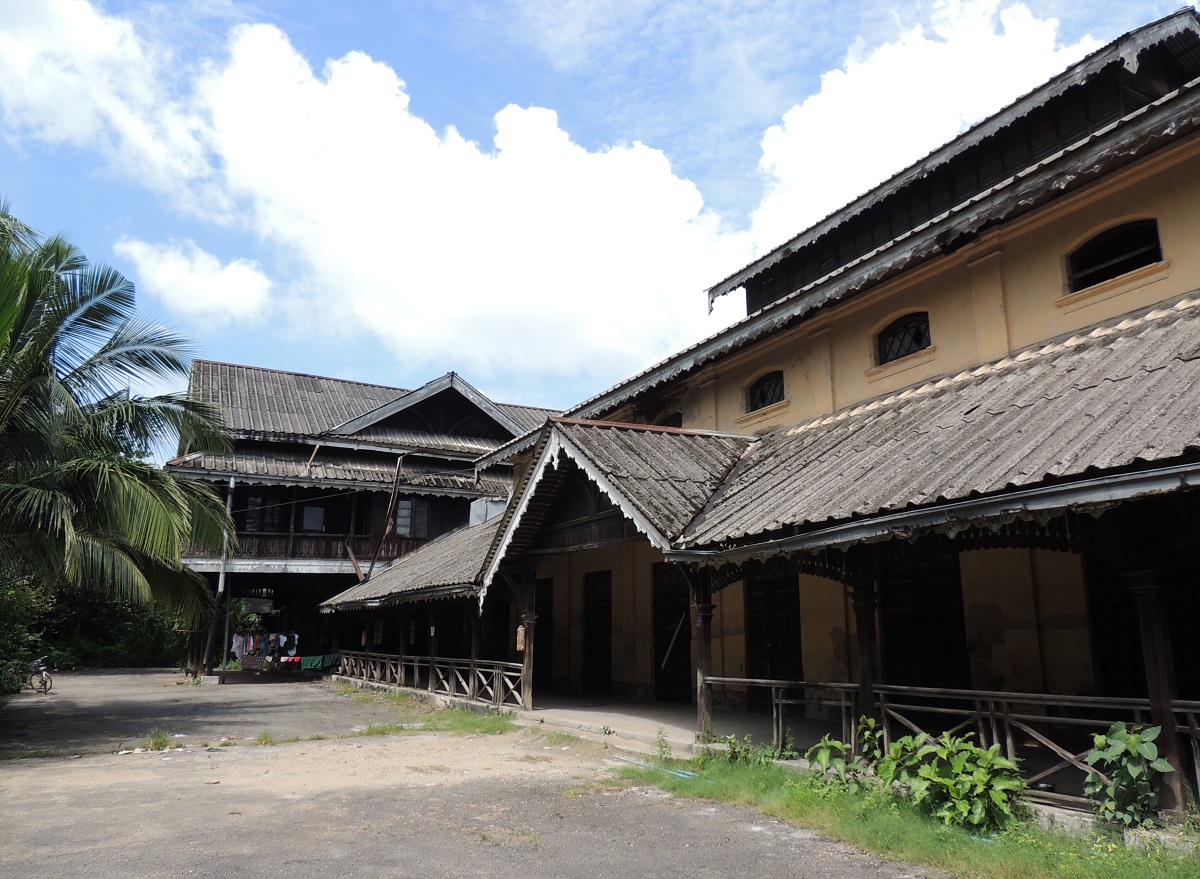 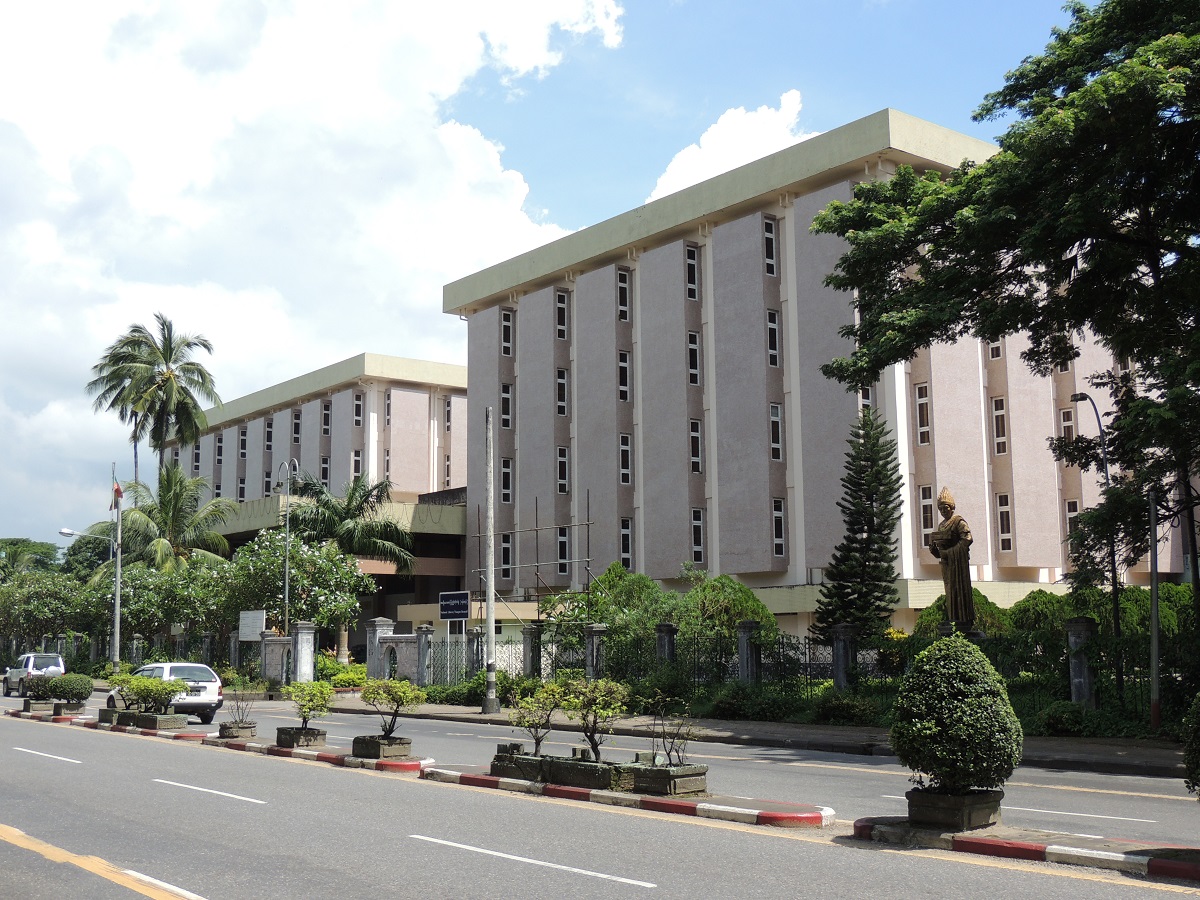 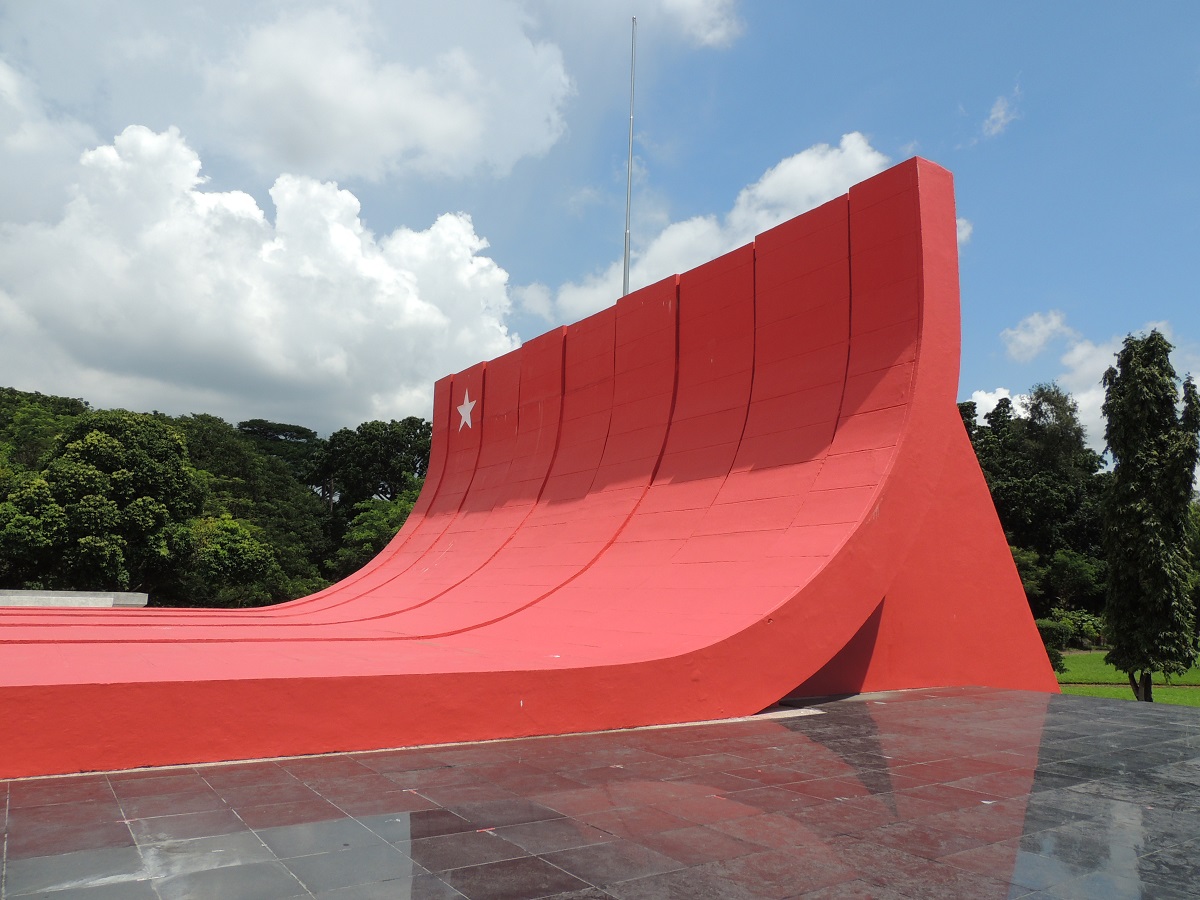 Dagon
Founded Yangon's story begins in time with the name Dagon, which the Mon people of Lower Burma founded in the 1000s. At that time, Dagon was a smaller fishing village that lay around the religiously important Shwedagon pagoda, whose size at that time was somewhat smaller than it is today.

Dagon was for many centuries a fishing village whose location was strategically good at the confluence of the rivers Pegu and Myitmaka. In addition, the Shwedagon Pagoda, which over time became an increasingly pilgrimage target with the accompanying activity as a side benefit to Dagon.

King Alaungpaya
The Konbaung Dynasty was founded by King Alaungpaya, who ruled 1752-1760. He is considered one of the great Burmese kings in history, which is not least due to the fact that for the third time through time he gathered the Burmese territory into a kingdom.

Alaungpaya was also the king, so to speak, founded Yangon. During his reunion of the land, he also conquered Dagon, and after that event he named the city of Yangon.

The British and the Burmese Wars
In 1824-1826, the first Anglo-Burmese war was fought, between British colonial troops and Burmese armies. Yangon was captured by the English, but after the end of the war it was returned to the Burmese. The Battle of Yangon had been going on from May to September 1824, when about 10,000 men from the British Navy had attacked from the river side. The Burmese retreated, leaving an empty city where the British entrenched themselves in the Shwedagon pagoda.

The Burmese king gathered 30,000 soldiers outside Yangon to fight back the numerically weak Englishmen. The Burmese troops were, however, materially inferior, and the British were able, by force of arms, to maintain a position against the attacking Burmese. The British used, among other things, Congreve rockets, which had been used for the first time during the British terrorist bombing of Copenhagen in 1807. It was a weapon unknown to the Burmese.

The war had revolved around the rule of the Northeast Indian Territory and the result was a great British victory, which meant that Burma had to pay compensation to the English as well as allow a trade agreement that increased British influence in Burmese. Formally, the war ended with the conclusion of the Yandabo Treaty, which was signed in Yandabo; just 80 kilometers from the then Burmese capital of Ava.

For the English, however, the war had been so expensive that it caused economic crisis in British India. However, the first Anglo-Burmese war was not to be the only one in the 19th century. In total, three became the kind that gradually secured British colonial rule in Burma.

The Second Anglo-Burmese War
After a few decades without war, a new war broke out between the English and the Burmese. In 1852, the British provoked a confrontation, so there was a cause for the war that began on April 5, 1852. They had, among other things, blocked Yangon's port and seized the Burmese king's boat. On April 5, the port of Martaban was taken and just a week later British forces captured Yangon.

Two days later they conquered the Shwedagon Pagoda, where they had also entrenched themselves during the war of the 1820s. The Burmese had to retreat to the north and the Yangon and Pegu regions were annexed by Britain as a colony.

The Second Anglo-Burmese War ended without formal peace. For the Burmese, the war meant that Pegu was lost to the king, proclaiming this part of Burma British on January 20, 1853. With the lost war, it also revolted against King Pagan Min, ruled by Mindon Min, who subsequently moved the capital of Mandalay.

The new regime
For Yangon, the new status of British colonial rule meant a greatly increased British influence, with trading companies pushing around, for example, teak and shipping. New societal structures and institutions based on British pattern and role model also influenced the cityscape, thus creating the foundation for the colonial era's preserved Rangoon.

Among the things that happened in Rangoon in the following years were the establishment of the port authorities in the Port of Rangoon, the publication of the Rangoon Chronicle newspaper, the establishment of schools such as St Paul's English High School and the coming of the railway in 1877. The population has increased over the decades from around 30,000 at the first Anglo-Burmese war in the 1820s to over 130,000 in the early 1880s.

Burma's Final period
By 1853, Yangon and Pegu had become British with the names Rangoon and Lower Burma. Back in independent Burma was Upper Burma, where the Konbaung dynasty ruled for the Third Anglo-Burmese War, which took place on 7-29. November 1885.

Diplomatic relations had been severed between Great Britain and Burma in 1878, and the French had conquered Indochina and entered into cooperation agreements with Burma. These things were factors that led the British to truly declare Burma's war through the establishment of an ultimatum that could not be accepted by King Thibaw and the government of Mandalay.

The result of the war was the conquest of Mandalay and the deposition of the Burmese monarch. Independent Burma, along with the previously conquered parts of the country, became subject to the British as a province of British Raj in India.

British colonial development
Rangoon saw increased growth in the last decades of the 19th century, with population continuing to rise rapidly, with the city also growing. With the population, new churches and schools were built, and in general it was a new one with a lot of new construction and good conditions for the British belfry.

The local elite also had access to, for example, the elitist education system where the language was English. The University of Rangoon was the only country, and from this originated both British graduates and locals, who, for one, came to influence Burmese political development from the country's independence in 1948.

In the year 1900, more than 200,000 lived in Rangoon, and trade grew continuously. In those years, many of the city's famous colonial buildings were erected, such as the prestigious Strand Hotel and the Secretariat Building as the political center of power.

The New Capital and World War II
In 1937, Rangoon became the capital of British Burma, which, after being governed as a province of India, became an independent province. At this time, Rangoon was planning according to British model in his city plan with large parks and upscale residence along the artificial lakes of Kandawgyi Lake and Inya Lake. However, the population was quite mixed and over 50% of the 1930s half a million inhabitants were from India or from southern Asia. Only about a third were Burmese.

In 1920, 1936 and 1938, Yangon became a scene of rebellion in connection with the Burmese wanted independence from Britain. The rebels were overcome by the British, but World War II changed the country significantly. Japan invaded and conquered Burma in 1942, and the war resulted in bombardment of the city; For example, the British sought to destroy the port facilities in the city. Japan's occupation of the city and the country lasted until 1945, when British colonial rule continued.

Independent Burma
After the end of World War II, there was a continuing demand for independence from Britain, and one of the front fighters was General Aung San, who in 1946 became Burmese leader under British rule. Aung San held a political seat in Yangon's Secretariat Building, and in 1947 he led the successful negotiations with the English for Burma's independence, which became a reality on January 4, 1948. Before that, however, Aung San was shot by a political rival on July 19, 1947. It happened in the Secretariat Building, so Aung San did not come to experience the freedom he had fought for.

In the new Burmese union, changes were rapidly made in relation to British times. Highly visible, many of Yangon's street names were changed from British to Burmese; this was the case, for example, of Dalhousie Road, which became Maha Bandula Road. Symbolically, the street name went from paying tribute to a British who had contributed to the Anglo-Burmese wars, to a remembrance of General Maha Bandula, who, as Burmese, fell during the first of the three 19th century wars against the British.

1950s Rangoon to Yangon of Today
In the first decades after Burma's independence, the country's governments expanded the capital, which was still called Rangoon. New suburbs were built and the city spread rapidly from the old British center to the south in today's metropolis.

On the whole, it was expanded at the same time as the buildings of the former colonial period were decaying. Infrastructure and building stock were not sufficiently maintained throughout the 1960s to 1980s, but during the same period, the buildings were not sanitized, which is why Yangon contains a number of British buildings that many other colonial capitals cannot show in the same volume and quality.

In 1989, Rangoon's name was officially changed to Yangon, and later the country changed its name from Burma to Myanmar. In 2005, the capital moved to Naypyidaw in central Myanmar, and as a result, Yangon was no longer the country's capital with the many political institutions that come with this status.

However, Yangon remains clearly Myanmar's largest city, and growth has been steady in recent decades. In 1983, the figure had reached 2,500,000 inhabitants, while the population had almost doubled thirty years later. The large growth, which has also been economic in recent years, has its mark on the street scene. Old buildings from the colonial period have to some extent been downgraded in favor of taller and more modern buildings. This development started in the 1990s, when Yangon designated hundreds of buildings with a status of conservationists. Today, these buildings are beginning to be renovated to former glory.
Skjul indhold her 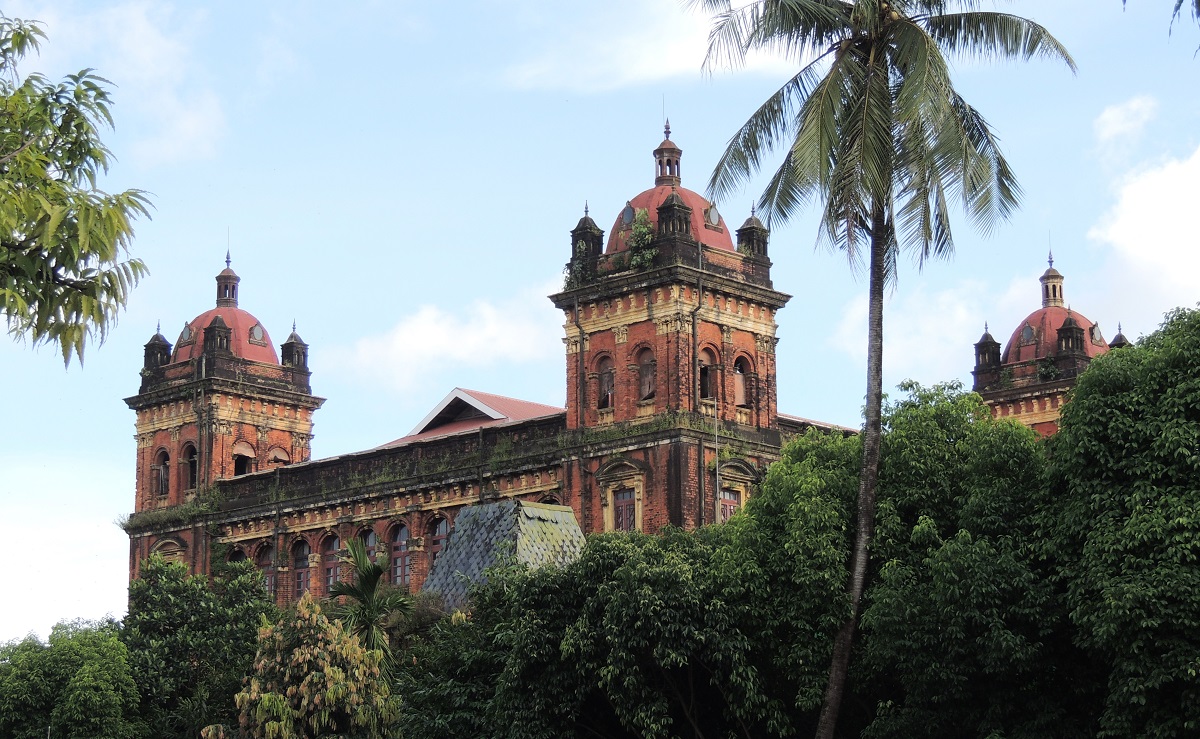 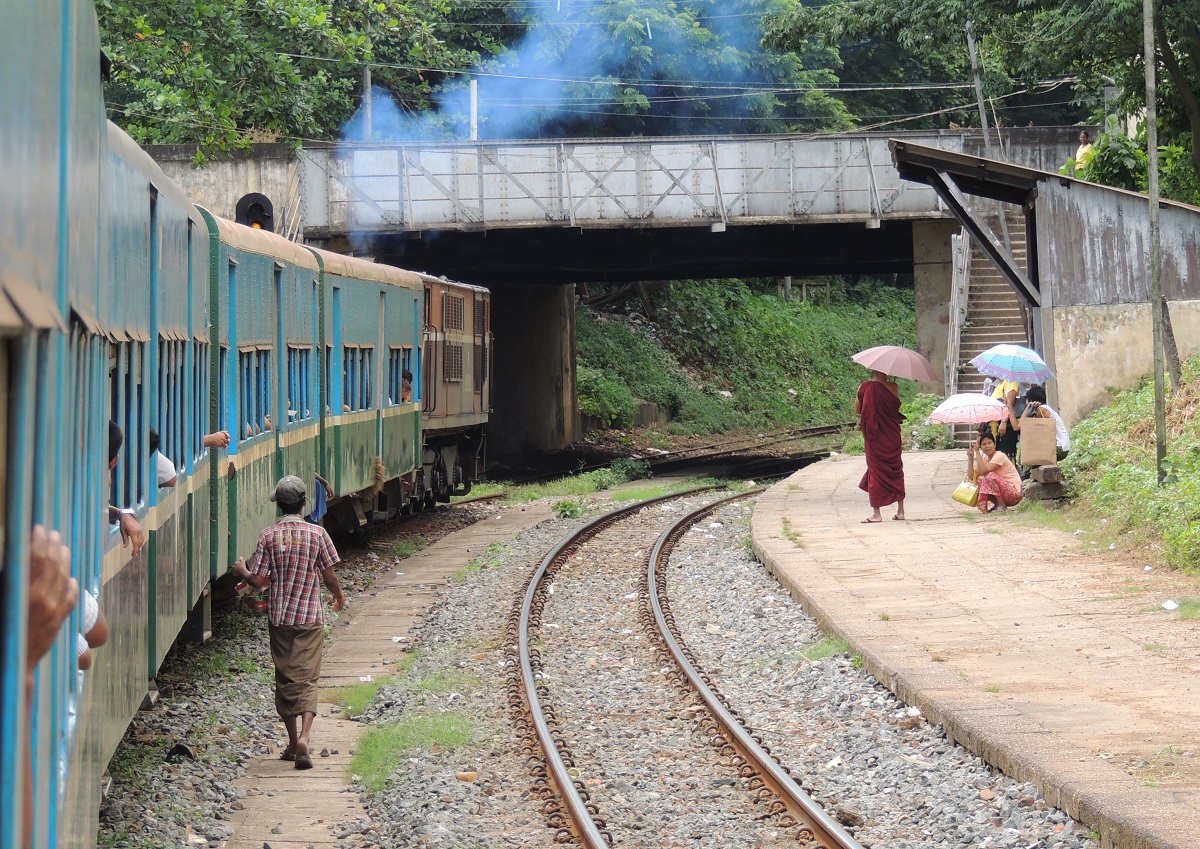 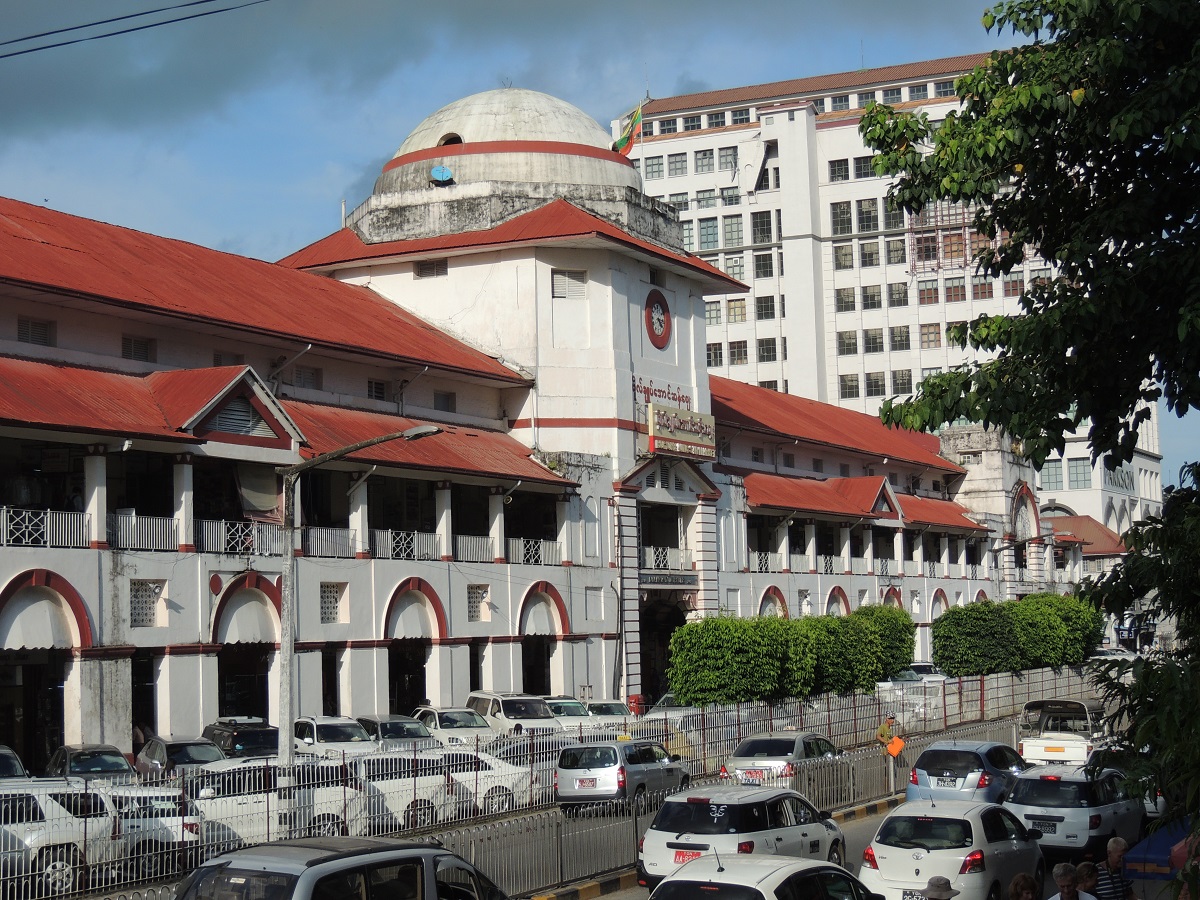 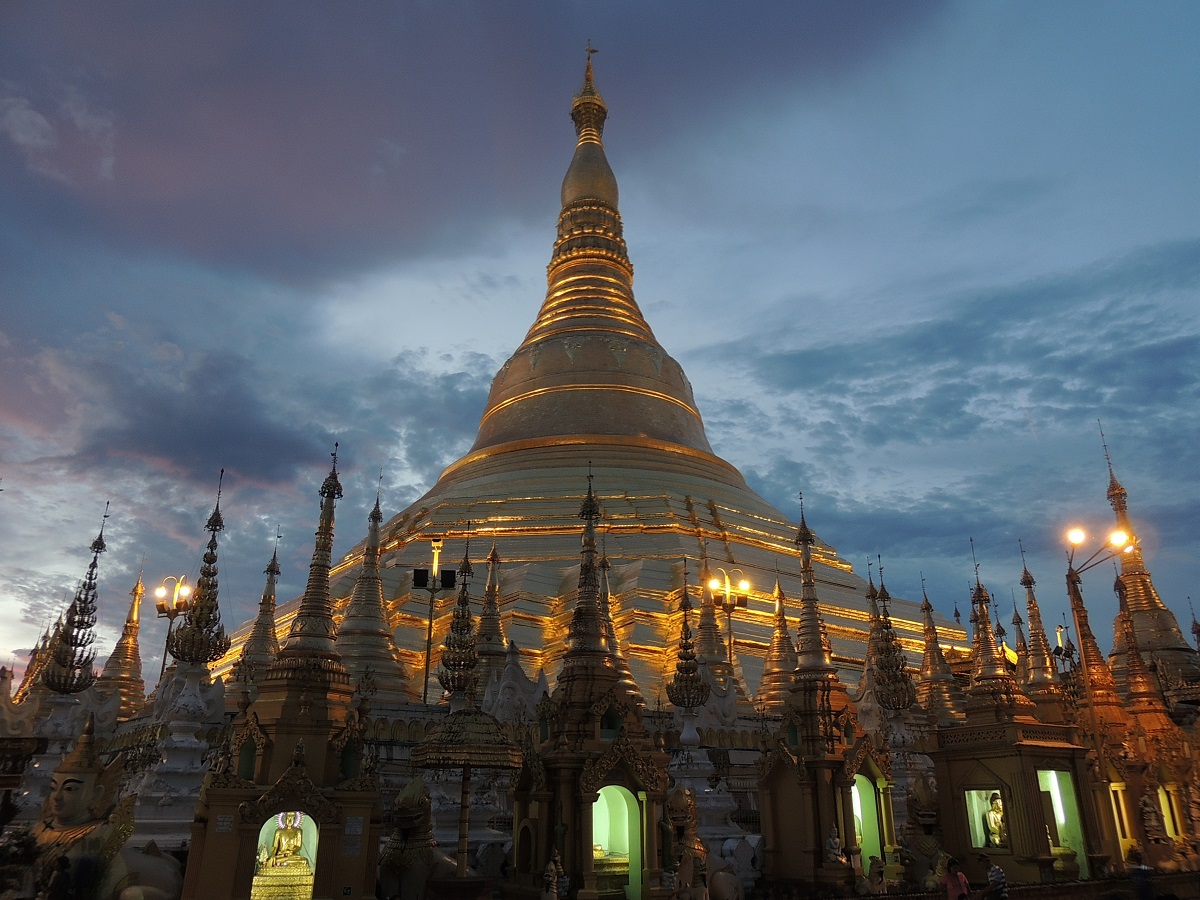 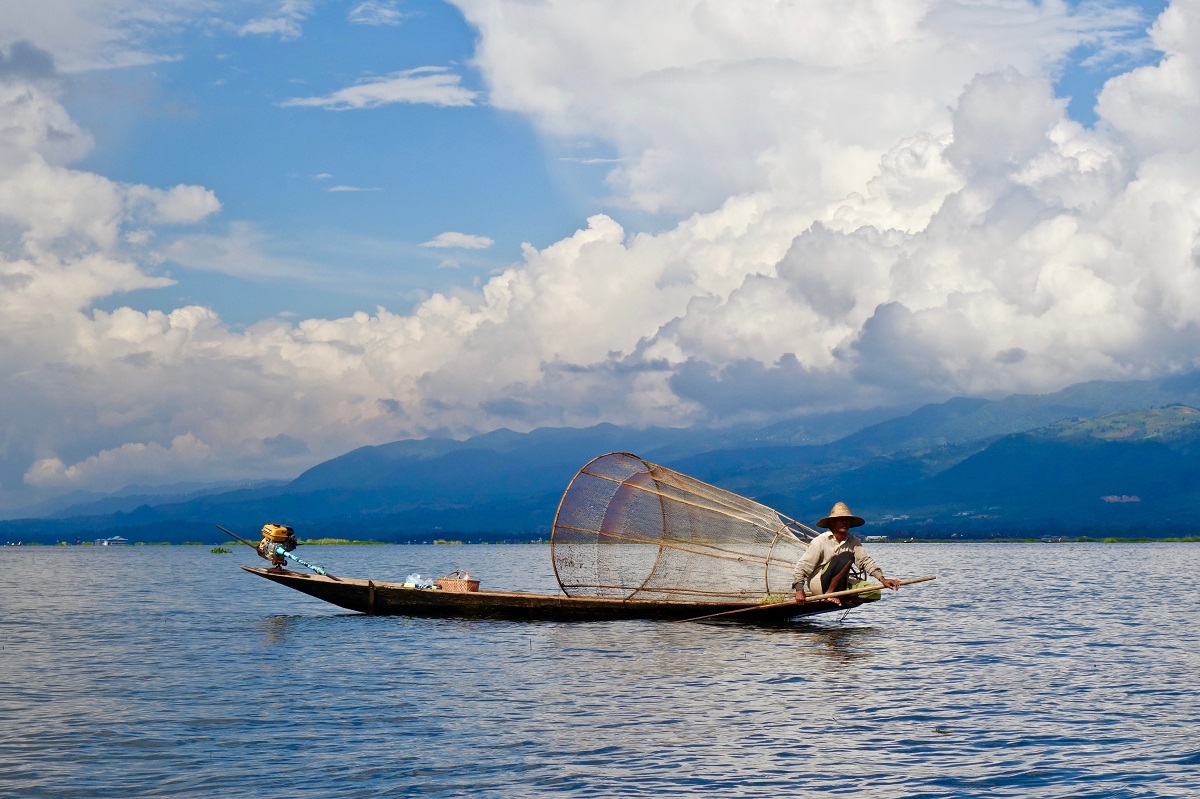 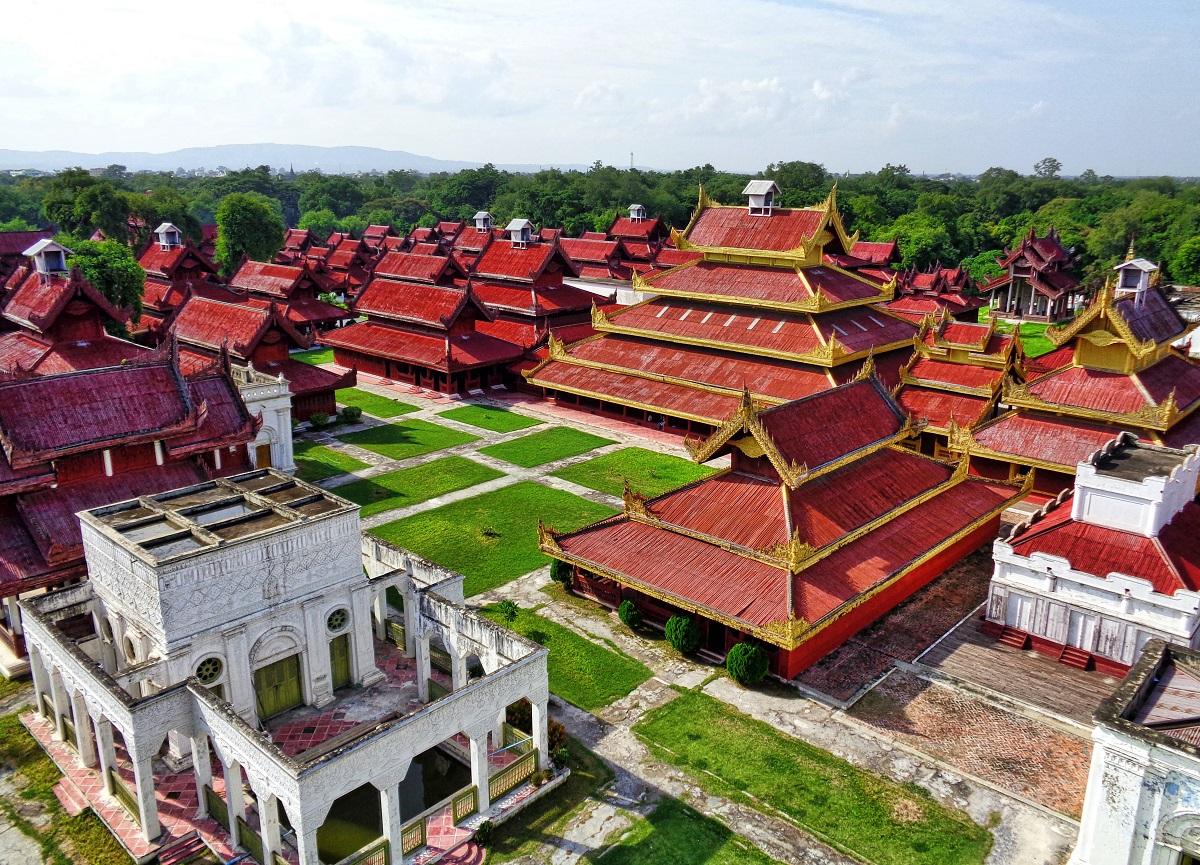