A trip to Yerevan is an exciting trip to one of the oldest inhabited cities in the world. Ruins from the city's early times such as the fortress Erebuni and the Christian era that began as early as the 300s are visible signs of the modern city's early beginnings.

Throughout the 1900s, the city grew from 30,000 inhabitants to house more than one million people, and it is a fine example of Soviet development, drawing inspiration from traditional Armenian architecture. Between the buildings there are parks, lakes and in general an airy and lovely atmosphere.

The center of the city is full of designed buildings in imposing architecture. They were to symbolize the ability of Soviet Armenia, and the city's large squares and wide boulevards tie things together in a distinguished way.

North of Central Republic Square stands the city's opera and then the stairwell and fountain named Cascade, that is not seen anywhere else in the world. The Cascade is a must see and climb, and at the top there are several monuments such as Mother Armenia; and from here is a great view of Yerevan and to the historic Armenian mountain Ararat.

Fine museums, green parks and delicious food are also one of the experiences in Yerevan, where interesting purchases can be found in the colossal Malatia market or around in the streets of Yerevan. 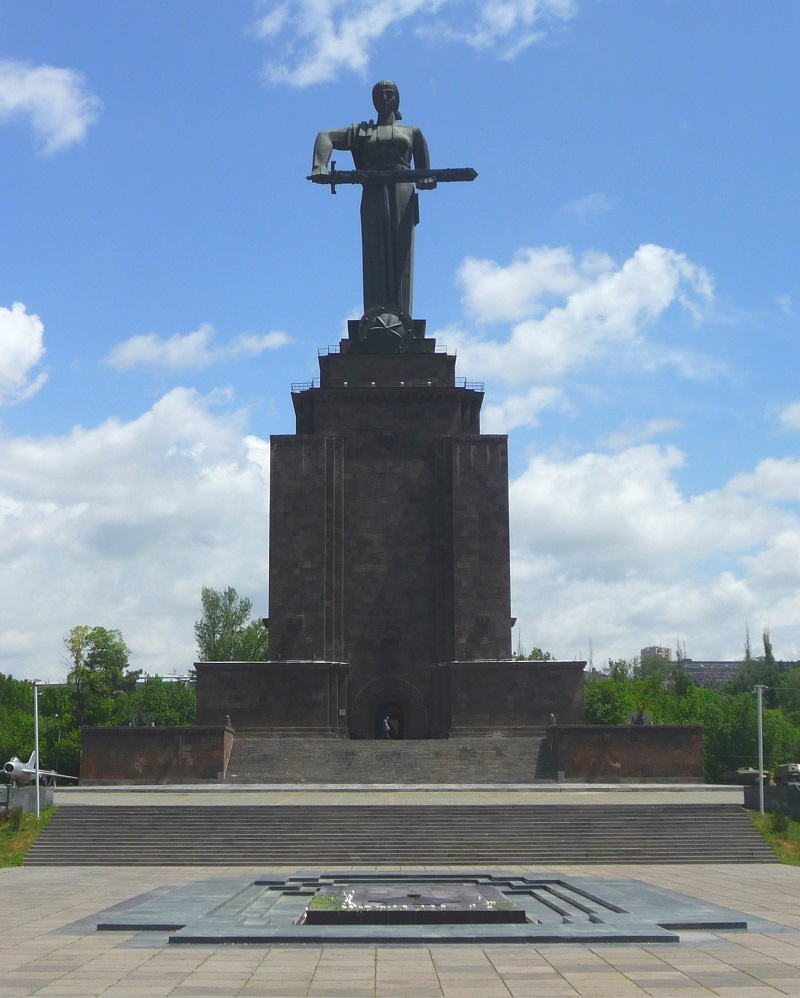 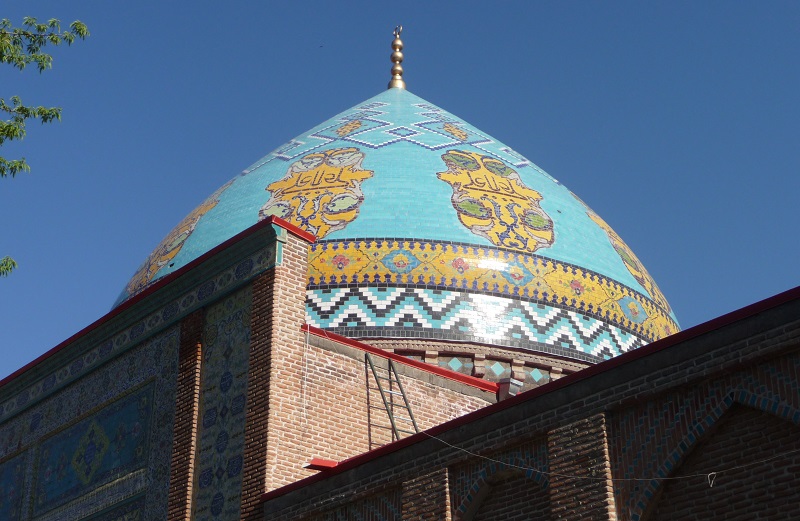 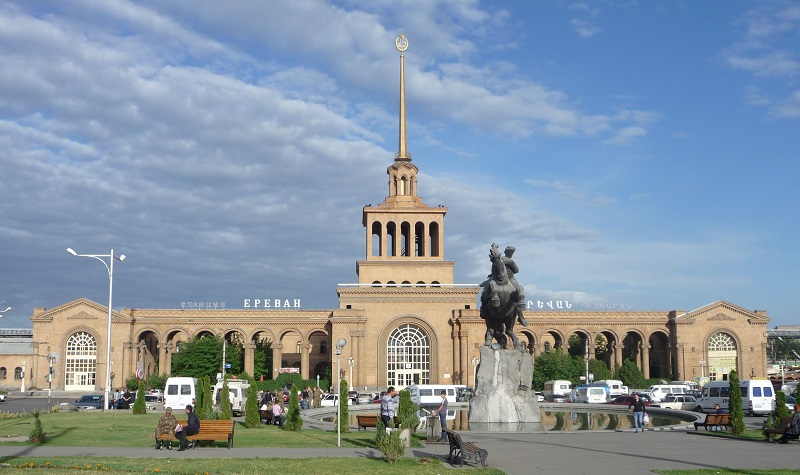 The first settlement
King Arame is mentioned as the first king of Urartu, founded in the 8th century BC. The kingdom lay around Lake Van and also included the present-day Yerevan land as a border area to the northeast. The kingdom of Arama united the tribes of the area and formed a united front to the Assyrian kingdom to the south.

In the Yerevan area, the settlements had emerged as early as the 3000s BC, from which remains from several fortified sites have been found. The first known fort was founded as Erebuni in present-day Yerevan in 782 BC by order of King Argishti I, making the city one of the oldest in the world. Erebuni's fort was built to defend the country against people from the Caucasus region.

In the following centuries, Erebuni evolved to be among the leading cities and centers in the province, and larger public facilities such as canals and reservoirs were established.

Christianization of Armenia
Armenia became a Christian country in the year 301, and the first churches were established. Yerevan and Armenia developed under several local leaders until the Arabs entered the area. Yerevan fell in the year 658, and it marked the beginning of many centuries when changing powers brought mainly foreign influence.

With the central location of Yerevan on the trade routes between Europe and Asia, Ottomans and Persians struggled for a long time, and countless times in the 1500-1700s the city changed hands between the two powers.

On several occasions Armenians were forced out of the city; for example, in 1604 where the Persians gained Muslim majority and dominance through the relocation of thousands of Armenians to Persia. The Armenian share of Yerevan's citizens was as low as 20%.

Russian influence and development
During the Russo-Persian War of 1826-1828, Russia conquered Yerevan in 1827, and officially the city and Armenia became part of the Russian Empire the following year with the Turkmenchay Treaty. With the support from the tsarist regime in Russia, many Armenians were able to settle in Yerevan again. They came from Turkish and Persian areas, and with the relocation the proportion of Armenians in the city increased from just over a quarter to over half.

With the Russian administration, Yerevan became the capital of the Armenian region of the empire in the years 1828-1840, and thereafter it was the center of various administrative regimes until 1917.

With Russia a strong European influence came to Armenia, and in the 19th century several buildings were completed and institutions set up according to Russian model. Jerevan's first overall city plan was also drawn these years; it happened in 1854.

Beginning of the 20th Century
At the beginning of the 20th century, the population had risen to around 30,000, and economic development continued from the 19th century. In 1902 a railway was established, and one could now drive to, among others, Tbilisi and Alexandropol, which today is called Gyumri.

In 1917, the Russian Empire fell, and the same year the Transcaucasian Federation was established between Armenia, Georgia and Azerbaijan. This political construction did not last long, and on May 28, 1918, Armenian leader Aram Manukian declared the Armenian independence, and the country was now an independent republic. One of the country's decisions was the establishment of the University of Yerevan.

Yerevan in the Soviet Union
On November 29, 1920, the 11th Red Arms of the Bolsheviks came to Yerevan and occupied the city. Three days later, Armenia became part of the Soviet Union as Armenia's Soviet Socialist Republic.

The capital of the new republic became Yerevan, for which a city plan was quickly drawn up. It was headed by Russian-born Armenian Alexander Tamanian, and the plan was adopted in 1924. The plan was sized to a city of 150,000 inhabitants, but Yerevan grew under the Soviet Union to become a million city.

The Tamanian urban plan and Soviet architecture continue to dominate the Yerevan city center, and over the years a number of imposing buildings were erected and the city developed into a cultural and scientific center. The city, whose modern development started with the arrival of Russia in 1827, also built a metro system, when the one million inhabitants mark qualified for it in the Soviet system.

Yerevan today
Following the dissolution of the Soviet Union, Yerevan became the capital of the current Armenian Republic, established on September 21, 1991. Since then, significant investments have been made in new construction and renovation of the center of Yerevan, which today carries the old Armenian traditions into the culture and architecture.
Skjul indhold her 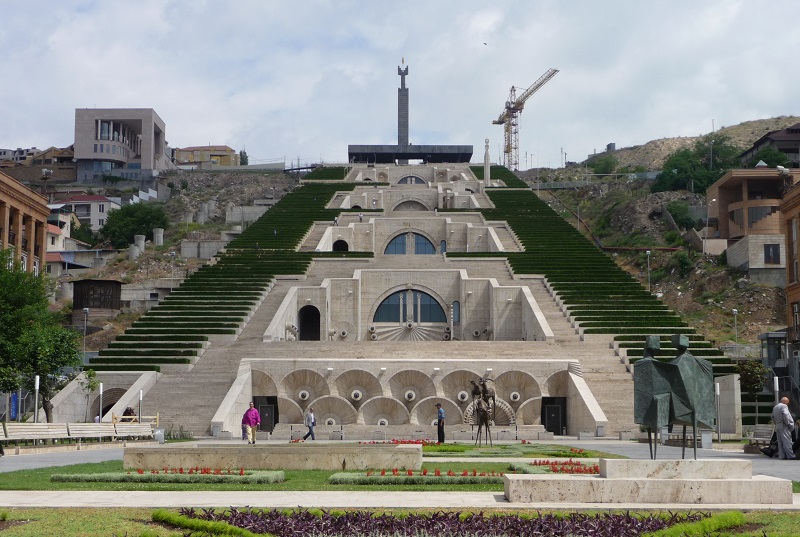 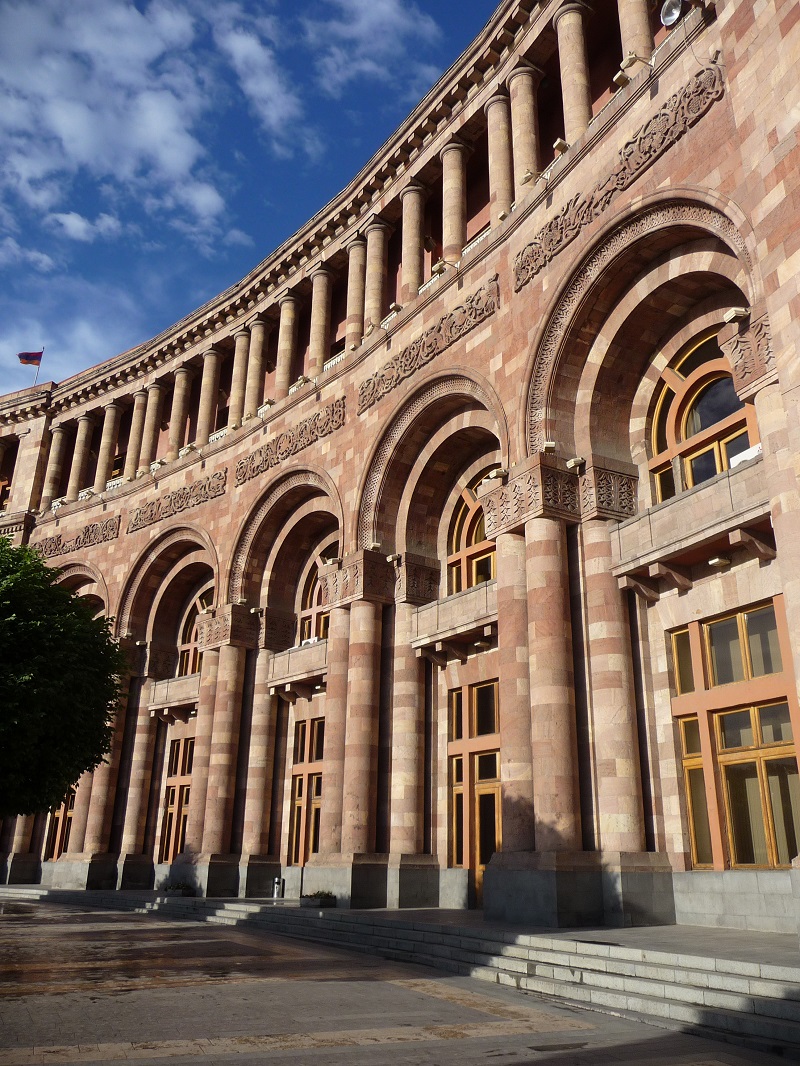 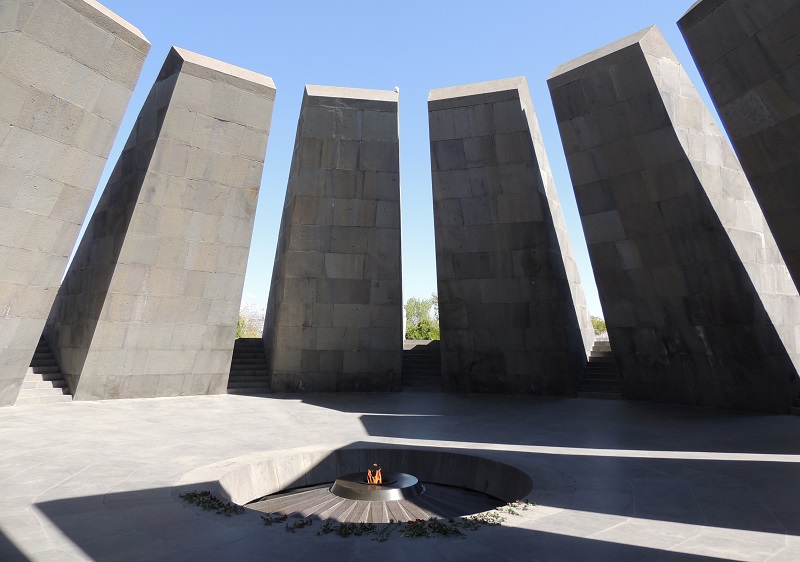 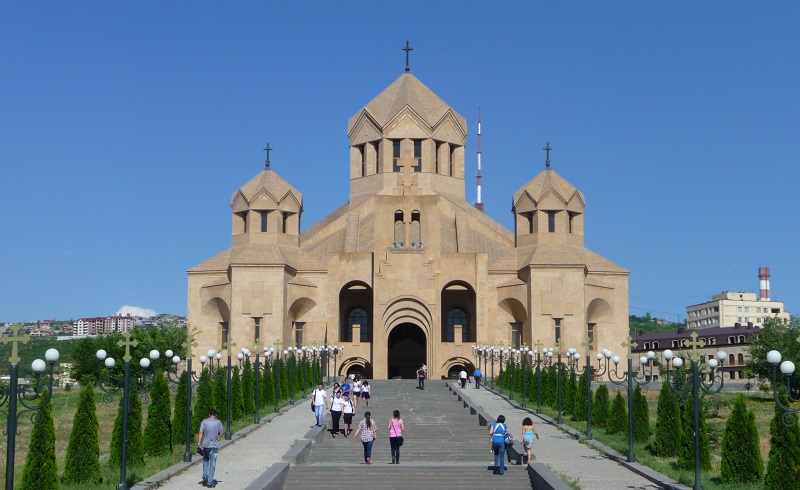 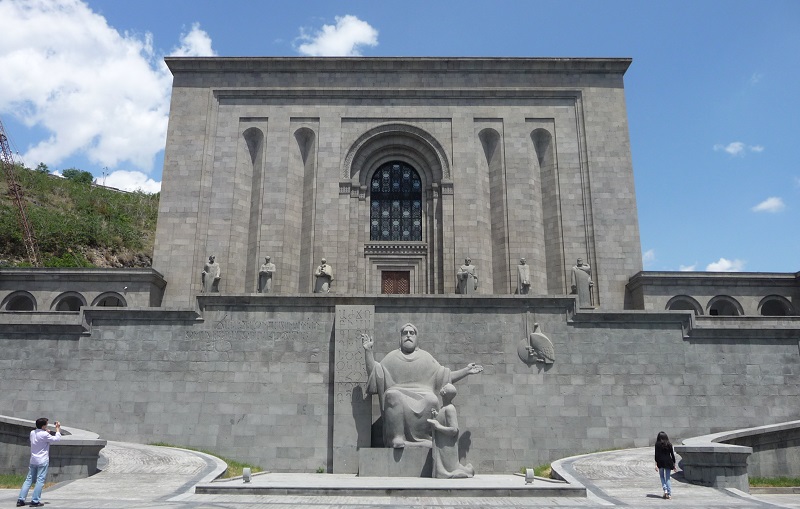 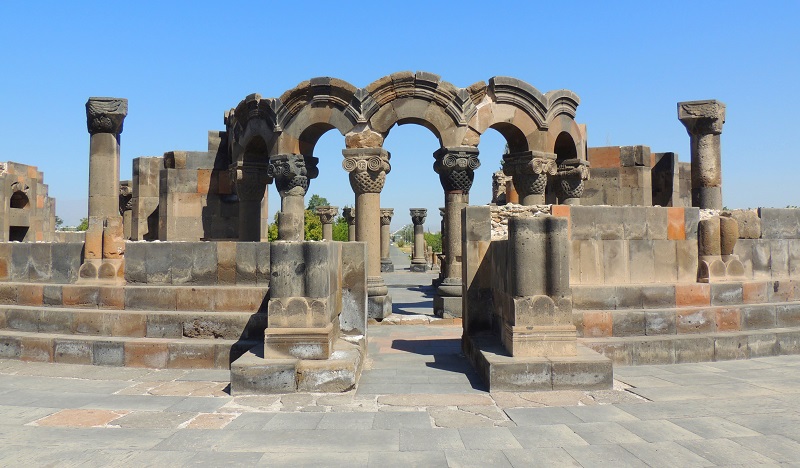 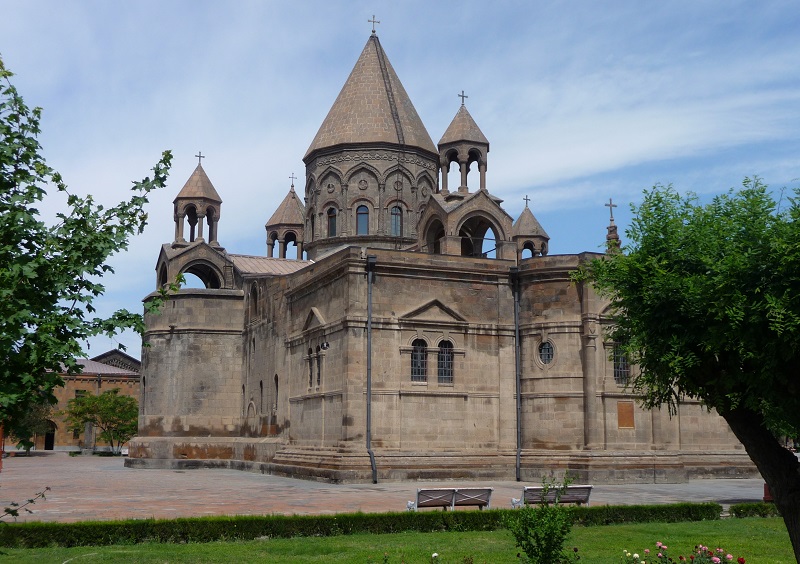 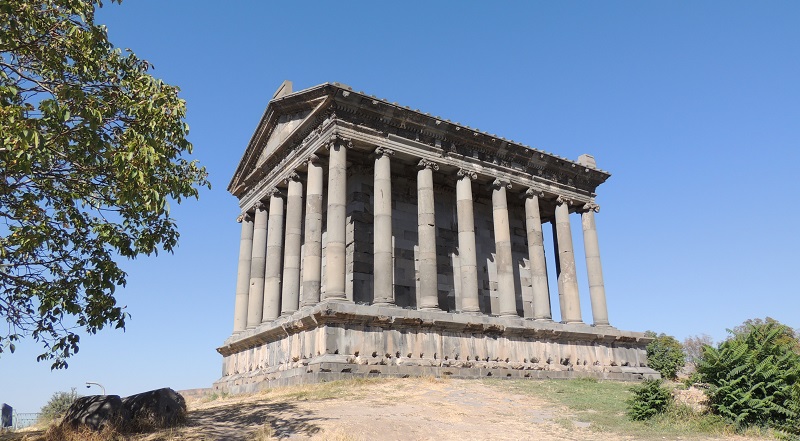 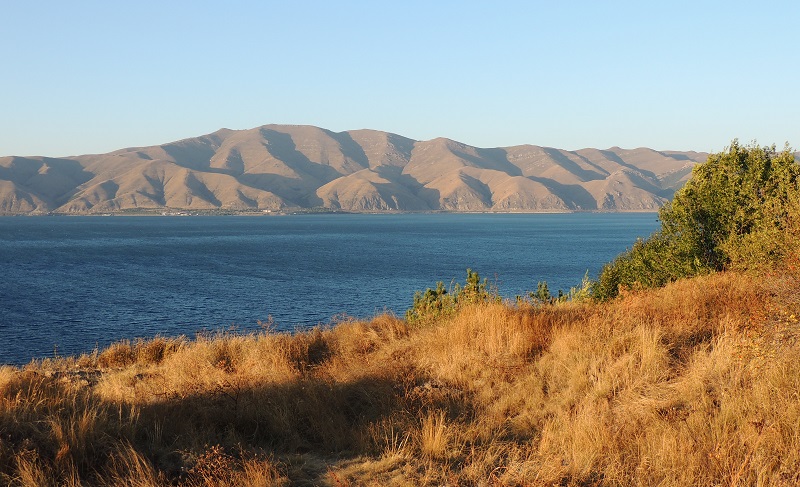